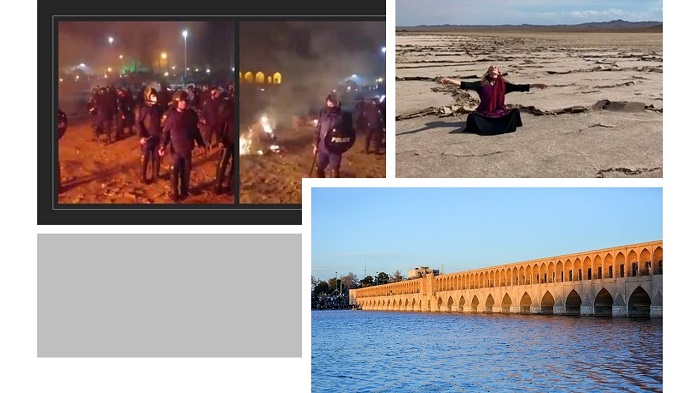 The uprising of Isfahan farmers and residents on November 26 was met with alarm rather than surprised by the Iranian authorities.

Even though officials and state media had warned of “riots” for months, the unavoidable happened, demonstrating that if Tehran fails to find real solutions to the interconnected socio-economic challenges, it may expect more turmoil and instability from a public tired of the clerics’ authoritarian rule. The following is a list of numerous facts that have previously been covered by Iranian media, on November 27:

“The water crisis is strangling the country,” the state-run newspaper Ebtekar stated today. Every day, a new territory asserts its rights and raises its voice. Social flaws have surfaced, and if they are not addressed, they will get more complex by the day. The country is facing a water shortage. Every day, mismanagement in the water industry worsens the issue. It can’t be changed by any natural or miraculous event.”

“Yesterday, a number of my colleagues were unfortunately injured because of the stones that were thrown at them,” Mohammad Reza Mirheidari, the police chief of Isfahan province, stated. These counter-revolutionary groups have been known to use bombs or stab police officers.”

While asking for a harsher crackdown on protesters, Kayhan daily added: “Their action had nothing to do with the peaceful gathering of farmers that had ended. These riots reminded us of November 2019, where hired thugs had built several groups and were prepared for chaos and destroyed banks, cars, and mosques. The resurgence of these riots requires a more decisive disciplinary and judicial approach so that the enemy no longer dares to even imagine destruction and unrest.”

“They [the enemy] are working and creating content to suppress our state by inciting people inside the country against the system,” Ahmad Alamolhoda, the supreme leader’s representative in Mashhad and Ebrahim Raisi’s father-in-law, stated during his Friday prayer sermon. They’re working on this invasion, on the attack on our system, in order to rot it from the inside out, to disintegrate it from the inside out.”

“Given the issues we have within our society, the enemy wants to use soft warfare to incite an internal crisis,” Alamolhoda warned, as per local Khorasan TV.

“We are witnessing an accumulation [of crises] in our country, namely environmental, climate, the spread of corruption, and economic problems,” wrote Mostafa Tajzadeh, a former acting interior minister, in the state-run publication Sharq today.

The problems will get worse by the day

“In fact, it is the people who have taken to the streets to demonstrate.” They can’t be linked to outsiders, and they can’t be labeled separatists… Most significantly, they will not be placated by a short-term ransom. These issues might arise in any part of the country, resulting in a new form of dissatisfaction and civil unrest,” Tajzadeh remarked.

“If we keep taking the same approach, the problems will get worse by the day,” the former official warned. In recent years, we have missed numerous opportunities to solve people’s issues and win their pleasure by looking at things through the prism of security and national interest because we lacked a strategic perspective. It’s going to be dangerous if we keep on like this.”