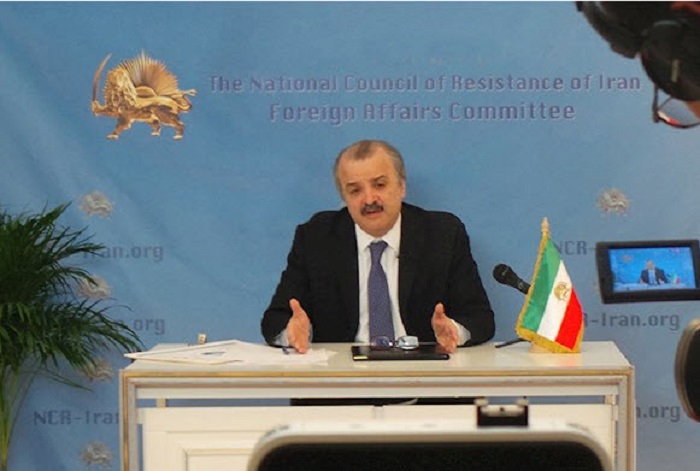 During the past year, there have been considerable ups and downs in nuclear negotiations, the nuclear deal, and relations between Western countries and the regime. With the inauguration of a new administration in the United States, there was anticipation inside the regime that all sanctions against Iran would be lifted soon.

The regime dropped out of the talks after Ebrahim Raisi

But the regime dropped out of the talks after Ebrahim Raisi was elected president. However, in response to increasing international criticism, it has indicated its intention to re-join the Vienna talks in late November. Mohammad was recently interviewed about the realities of Iran’s nuclear program.

Why is the regime resorting to such maneuvers, and what are its objectives?

“In a word, through these maneuvers, the regime intends to buy time for the development of nuclear weapons. (…). The regime is at a strategic impasse. The 2017 and 2019 social uprisings pushed the regime to the brink. That is why Khamenei was forced to close off divisions within the regime, thinking that closing ranks would both help him intensify suppression to prevent further social unrest and also pave the way for the development of a nuclear weapon. Obtaining the bomb is an instrument to advance its regional meddling, terrorism, and warmongering…”

The regime’s consolidation of power

What are the message of the regime’s consolidation of power and Raisi’s installment both domestically as well as internationally?

“In the eyes of Khamenei, the Iranian people pose the greatest threat to the regime. So, the selection of Raisi, who is the murderer of supporters of the main opposition Mujahedin-e Khalq (MEK) in 1988, as well as protesters in November 2019, is a declaration of war against the Iranian people. On the one hand, he wants to respond to any uprisings with an iron fist, and on the other hand, close ranks when it comes to foreign policy in order to be able to attain an atomic bomb unimpeded and as quickly as possible. The regime views the bomb as the guarantee for its survival. So, Raisi has two key mandates: Suppression of uprisings inside Iran and accelerating attempts to obtain a nuclear weapon…”

So, somewhat related to our first question, how can the regime’s nuclear policy be articulated? And, what options does the international community have to prevent Tehran from obtaining the bomb?

“If you look at the developments of the past 30 years, you will see that the regime has, at every single step, resorted to deception and clandestine activities in order to get its hands on the bomb.

We shouldn’t forget that over the past 30 years, the regime did not voluntarily declare any of its nuclear sites or clandestine activities unless they were first exposed by the Iranian Resistance or other sources.

The regime is continuing on the same path of deception

It is no different today. The regime is continuing on the same path of deception and has not ceased its bomb-making enterprise for a second. Unfortunately, Western countries have always given concessions to the regime, providing the regime the sufficient resources – financial or otherwise – to pursue its agenda.
As we speak, Khamenei, and he will never do so…”

The regime is buying time in order to speed up its bomb-making project; it currently possesses over 120 kg of 20 percent enriched uranium and has started producing uranium metal. As a result, the regime may be able to develop a nuclear weapon, showing that it is obviously pursuing its bomb-making goal, and the West’s passive policies and appeasement have only benefited the mullahs’ nuclear program’s acceleration.

Mrs. Maryam Rajavi, President of the National Council of Resistance of Iran (NCRI), stated that the only way to prevent the regime from obtaining a nuclear weapon is to reimpose the six UN Security Council resolutions and pursue a firm and decisive policy against it.