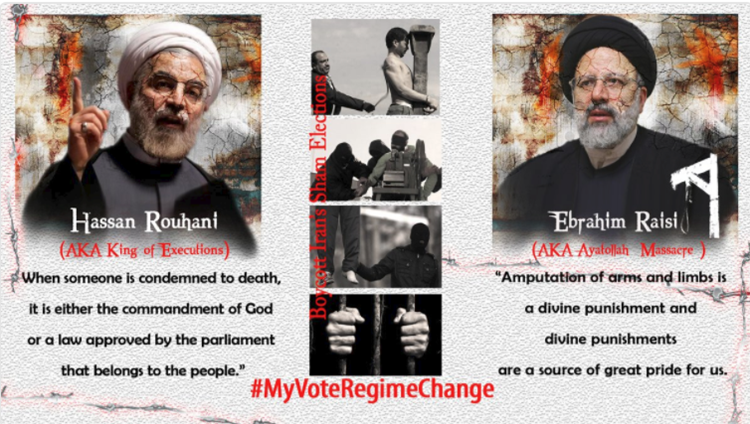 As the Iranian elections approach, there has been a huge campaign that is encouraging the people to not participate in voting. Across the country there are numerous social media posts, videos and posters that highlight the people’s desire for the regime to be overthrown.

The campaign is present across the whole country, not just in the capital and the main cities.

In one video, people can be seen holding signs declaring that their vote is to overthrow the regime.

The campaign has been instigated by the PMOI who are making great efforts to reach as many people as possible in the country to convince them to boycott the elections.

Posters are being put up across many cities. Some of the slogans that can be read include references to the leader of the opposition and others encourage the boycotting of the “sham” elections and the overthrow of the corrupt regime. One reads: “My Vote: Maryam Rajavi”. Many had photos of Rajavi and others had symbols associated with the resistance.

The PMOI is fighting on behalf of the Iranian people for their basic rights and calls on the people to demand change in their country.

The National Council of Resistance of Iran (NCRI) is a coalition of the opposition groups and is led my Maryam Rajavi. Many of the members are people who have been forced to leave the country by the Iranian regime which has supressed dissident and political opponents for many decades.

It is hardly surprising that the security forces in Iran have done their best to remove all traces of the opposition’s campaign, but hopefully the impact was effective. The release of videos and the putting up of banners and posters was done strategically so that the maximum number of people could be reached. For example, many posters and banners were put up during the night so that the morning commuters could see them. Posters were stuck on bridges and on billboards and walkways.

This is clearly a great threat to the regime who believes it can suppress the people into silence. More and more people are taking notice of the opposition and many believe that regime change is possible. The people are starting to realise that the Iranian regime is rotten to the core and nothing will change with these elections. People are now starting to understand that they do not have to suffer at the hand of the regime any more.