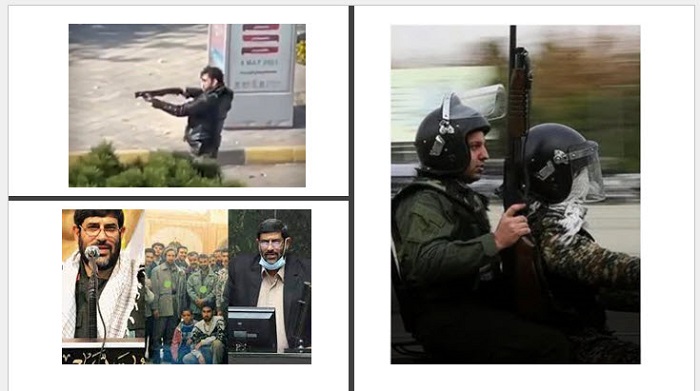 On Friday, June 10, Iran’s state-run media reported that, based on a new government bill, the Parliament [Majlis] is attempting to legitimize the security forces’ use of weapons during “illegal armed demonstrations.” In recent weeks, a large number of videos have been posted and circulated on social media platforms showing security forces using lethal force against peaceful protesters arbitrarily.

Security forces use weapons to crack down on grieving and protesting families of the victims of the Metropol collapse in Abadan, in the southwestern province of Khuzestan, according to a video posted by citizens from the city of Abadan. The ten-story twin towers collapsed on May 23, killing more than 42 people and injuring many more. According to locals, the actual death toll is much higher.

“Military forces must use weapons to defend themselves,” Mehdi Sa’adati Bisheh Sari, a member of the Majlis National Security Commission, said in a statement published by Etemad Online. The parliament recently put a draft amendment to the law on the use of weapons on the agenda; the law, titled ‘armed forces’ use of weapons in urgent cases,’ was passed in January 1994, more than 20 years ago.”

Sa’adati is an IRGC Brig. General and a former Revolutionary Guards (IRGC) Commander in the provinces of Hormozgan, Hamedan, Mazandaran, and Khuzestan, as well as a former Governor of Gilan Province. He was a protégé of Qassem Soleimani, the IRGC-Quds Force chief who was assassinated.

Sa’adati is a former IRGC commander in the provinces of Hormozgan, Hamedan, Mazandaran, and Khuzestan, as well as the former Governor of Gilan Province.

The state-run Iranian media has attempted to link the Majlis plan to the February murder of a security officer. “Following the ‘martyrdom’ of the Bidzard Police Station deputy chief in Shiraz—the capital of the southcentral province of Fars—in a clash with thugs on February 2, netizens launched a social media campaign, criticizing security forces’ conditions for the use of weapons,” according to the semi-official Tabnak website.

The Majlis has already approved a plan to regulate cyberspace, dubbed the “plan for preserving users’ rights on cyberspace and organizing social media.”

The Etemad Online explained, “The bill, which will be debated in Majlis in the coming weeks, will change the legal term ‘Armed Forces Agents’ to ‘Armed Agents’. In addition to the armed forces, ‘other persons authorized by law to carry weapons’ will be able to use them based on the new law’s provisions.”

In other words, the new law not only allows armed forces to use lethal force against demonstrators but also gives every government employee who carries a weapon legal cover to murder dissidents without consequence.

It’s worth noting that many Iranian city officials are armed. Mohammad Ali Najafi, the then-Mayor of Tehran, murdered his wife Mitra Ostad with his own pistol in June 2019.

“If ‘individuals who are armed by the authorities to protect themselves’ commit a crime, they will not be punished according to the Islamic Penal Code,” as per the bill draft. “There will be no need to pay compensation where their use of weapons is considered a ‘legitimate’ defense,” Etemad Online added.

Their findings revealed the government’s true motivation for passing the bill, which is to prevent future protests. “While current law only allows military and police officers to use weapons to establish order and security in illegal armed demonstrations, unrest, and riots on the order of the operation commander, the government’s bill allows’security agents’ to use arms as well,” according to one excerpt from the report.