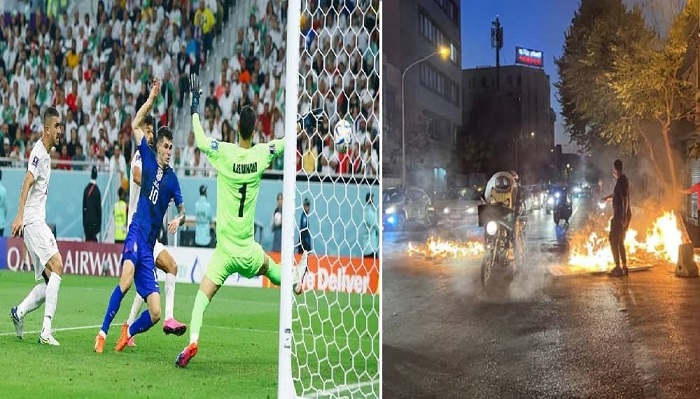 After more than 100 thrilling minutes, the regime’s team was defeated, and Iranian cities erupted in scenes of joy and jubilation for a people who have been zealously opposing anything that represents the ruling theocracy for the past three months.

According to them, the Iranian people won, while the regime and its soccer team lost. These celebrations are unique in modern Iranian history because Iran’s dictators have historically manipulated the sport to strengthen their grip on power and mislead public opinion.

Only a few days before flying to Qatar, “Team Melli” members met with the regime’s president, Ebrahim Raisi, who is well-known for his role in the 1988 massacre as well as his decades-long record in a judiciary that has ordered thousands of amputations and executions.

#Iran-Tehran, people are jubilant over the defeat of the clerical regime’s soccer team in the #WorldCup. This was not their national team, as it met with the henchman of #1988Massacre Raisi before heading to #Dubai. pic.twitter.com/FTtFbjTQSr

Using national hype for political purposes, on the other hand, is not new in the country. The previous monarchical dictatorship used so-called national symbols to both rally support and deceive the public. However, this pales in comparison to what the clerical regime has done. Since taking power in 1979, the clerical regime has hidden its sinister plans behind religious and national causes.

This includes extending the anti-patriotic Iran-Iraq War under the guise of “sacred defense” in order to control Iran’s restive and vibrant society by sending young people to war fronts as cannon fodder and wasting billions of dollars on the nuclear weapons program under the guise of “national technology.”

Iran’s regime continued the Iran-Iraq War at the expense of Iranians, resulting in over one million Iranian deaths and injuries. The country’s infrastructure was severely damaged, and authorities later admitted that they had suffered at least one billion dollars in damage.

#Iran ians are jubilant over the defeat of the clerical regime’s soccer team in the World Cup. This was not their national team, as it met with the henchman of #1988Massacre Raisi before heading to Dubai. People chant: Desperate leader, your grave is being readied. #IranvsUSA pic.twitter.com/s14Y8pEpUZ

Tehran also squandered national wealth in order to advance its nuclear program. Iran does not require a nuclear program due to its vast natural resources, such as fossil fuels. The clerical regime earned $800 billion in oil revenues during Mahmoud Ahmadinejad’s presidency. What happened to this cash windfall? It was squandered on developing the nuclear program and funding Tehran’s terrorist proxies, forcing Iranian children to rummage through garbage for food.

Feeling desperate in the aftermath of what many regards as Iran’s democratic revolution, the clerical regime has once again chosen to divert people’s attention and stimulate “national emotions” through the use of the soccer team and the World Cup 2022. Nonetheless, it has failed miserably.

Nearly three months of nonstop protests have raised public awareness. Furthermore, people’s hostility toward the regime has reached an irreversible tipping point, with people rejecting anything and anyone associated with the clerical regime.

However, the Iranian Resistance’s role in debunking all of the regime’s religious and nationalist claims is noteworthy. The People’s Mojahedin of Iran (PMOI/MEK) was the only progressive Muslim democratic opposition that opposed the regime’s constitution referendum and has advocated for the regime’s demise while insisting that Iran’s ruling theocracy is the main enemy of Islam. The MEK condemned the regime’s discrimination against religious and ethnic minorities, as well as mandatory veiling.