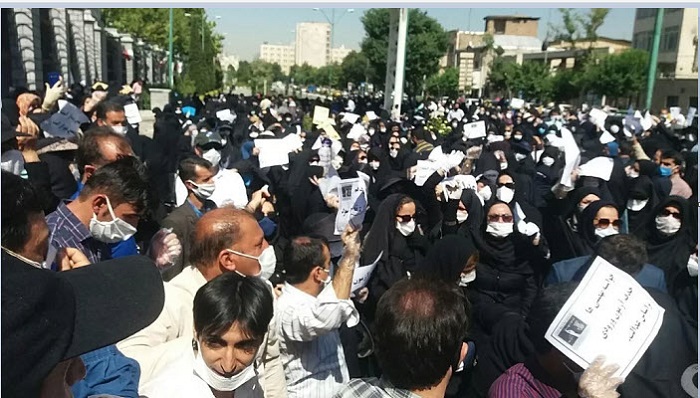 On Thursday, Iranian teachers are expected to hold a new round of protests as part of a nationwide movement that has been going on for months. It calls for a raise in poverty-level wages as well as protections for both teachers’ and students’ rights. Numerous arrests of teacher-activists and trade unionists, many of which have resulted in multi-year prison sentences amidst broader crackdowns on social activism, demonstrate the regime’s contempt for those rights.

On Tuesday, the threat of such crackdowns was heightened when it was announced that”My five-year prison sentence is for seeking justice and freedom; and for wanting to improve the education system and the rights of teachers and pupils,” Bodaghi said, according to the Norway-based NGO Iran Human Rights.

On its website, the same NGO stated that Bodaghi’s sentencing reflected an overall “escalation” in “arrests, sentences, and summons” aimed at a variety of people. Six civil and workers’ rights activists were arrested on April 15 alone, following unexplained and likely unlawful raids on their homes. Meanwhile, two Christian converts were sentenced to two years in prison for participating in a “house church,” according to the Human Rights Activists News Agency.

The Iranian regime has long had the highest rate of executions per capita in the world, with a large number of executions carried out each year for political reasons. Meanwhile, if the number of inmates killed by torture or abuse, or who die in mysterious circumstances while in state custody were factored in, the rate of execution would be significantly higher.

In the last two weeks, at least two new incidents have been reported. Milad Jafari, a 25-year-old Kurdish Iranian, was arrested on April 7 and taken to the Shapour police station, where he died within 24 hours, as per reports. His death was not revealed to his family until April 11, after which they were given several contradictory explanations, including an accident and a drug overdose. However, relatives who saw the body said he was bleeding from the nose and mouth, and he had bruises on his chest.

Another Kurdish man died in similar circumstances in the same police station in February, which has been the subject of numerous reports of torture in the past.

Last Thursday, Mehdi Salehi Ghaleh-Shahrokhi, another prisoner, was declared dead. Authorities at Isfahan Central Prison allegedly called his family to inform them of his death, but no consistent explanation was given, as was the case with Jafari’s family. According to some reports, Salehi’s coma was caused by him being given the wrong medication, which has fuelled speculation that his treatment was deliberately botched, either as a form of torture or as a form of extrajudicial execution.

A senior member of Iran’s Teachers’ Trade Association Rasoul Bodaghi has been sentenced to five years in prison on the charges of "assembly and collusion" & "propaganda activities".#Iran #HumanRights pic.twitter.com/FuUm3ZfGSe

All but the prisoner’s closest relatives were barred from attending Salehi’s funeral, which authorities organized themselves without allowing anyone else to closely observe the state of his body. Those who did show up were reportedly filmed from multiple angles and told that if they spoke to the media about Salehi’s case, they would face prison sentences.

Faced with such threats, human rights activists from outside Iran must shoulder a big part of the burden of publicizing his case. “Regardless of what cause of death is announced by authorities, his case must be investigated as an extrajudicial killing by an international fact-finding mission,” Mahmood Amiry-Moghaddam, director of Iran Human Rights, said. All those in the chain of command must be held accountable, including prison officials, the Head of the Judiciary, and the Supreme Leader of the Islamic Republic of Iran.”