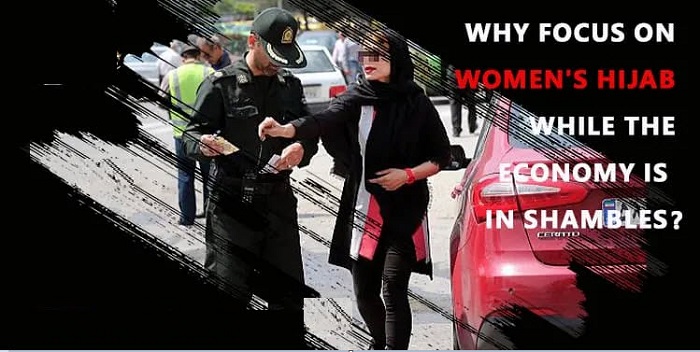 One of Khomeini’s first actions, which occurred just a few days after the 1979 Revolution against the Iranian monarchy, was to make the hijab mandatory. He strongly supported the slogan, “Either the veil or a hit on the head.”This law has been in place for the past 40 years under the clerical rule, but as societal unrest grows, we observe an increase in arrests and executions as well as a recent wave of attacks and harassment against women in Iran under the guise of defending the law requiring them to wear the hijab.

Government organizations and plainclothes agents, who are allowed to fire at will, have more justifications to harm women in the summer when people are more in need of lighter clothing, especially this year due to extreme heat, water shortages, and economic problems.

Reports and widely shared photos on social media have depicted guidance patrols stationed throughout the city violently grabbing women and girls before shoving them into patrol cars and driving off. Agents in plain clothes who work for the government are also permitted to insult and brutalize women.

The regime has passed new chastity and hijab laws in the last two months, and it has also established a new headquarters with the authority to order all agencies, officials, and business owners to harass women who refuse to wear the required veil. Furthermore, senior and junior government officials, Friday Prayer leaders, and others have all called for tougher laws against women.

Mohammad Hadi Imaniyeh, the governor of Fars, gave organizations and agencies orders on July 5, 2022, to increase repression and harassment of women for not adhering to “proper veiling.” By July 12, the governor wants all women to fully adhere to the regime’s stated standards.

While reiterating that government operatives have the right to fire at will in the face of public outrage over the law, the governor urged managers to use “young forces” seriously and bravely rather than waiting for orders.

According to state-run asriran on July 5, this official later added a threat against women, stating, “Those who cannot act within the legal framework should take unpaid leave until they can respect the laws.”

Esmaeil Rahmani wrote to Mashhad’s governorship and municipality in the final week of June 2022, threatening that “metro officers who fail to report such cases will be considered “quitters” and those quitters who fail to carry out the order will face Judicial process,” according to a July 6 report by the state-run Donya-eqtesad.

Per the state-run entekhab, the mayor of Mashhad stated on July 5 that “We are ready to provide ID cards for those who have passed specialized courses in how to issue verbal warnings (to improperly veiled women) so they can use all metro facilities for free.”

Even the use of perfumes and cologne is forbidden under the new employee dress code, which has been made known to government agencies. The administrators of these governmental organizations and plainclothes patrols will be alert for “tight or loose clothing, dress length, high heels, and the use of nail polish or makeup.”

Iranians, particularly women, are not, however, deceived by the mullahs. They face corruption and oppression in every protest gathering because they are aware of the regime.

The National Council of Resistance of Iran’s (NCRI) President-elect, Mrs. Maryam Rajavi, called on Iranian youths, store owners, and businessmen to protest on July 7, 8, and 10 in order to stop women in Iran from being harassed and insulted under the pretext of improper veiling.

Mrs. Rajavi said that “The ‘compulsory Hijab’ is the other side of the “mandatory removal of veils.” It is a threadbare method of dictatorships, from Reza Shah to Khomeini, against which people must protest and rise up.”