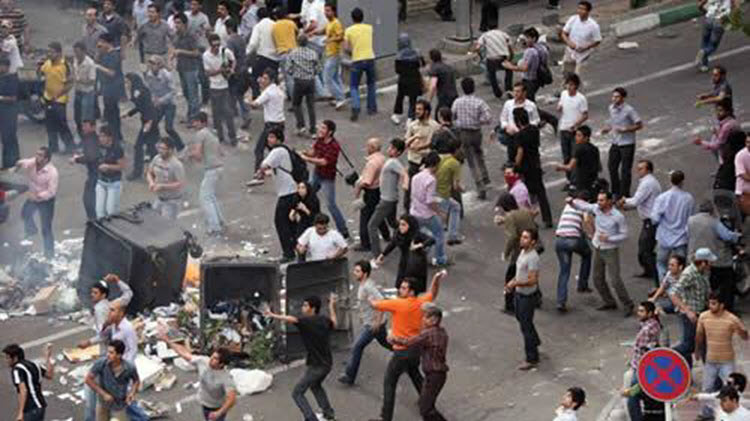 Iran’s upcoming election on May 19th has a cloud hanging over it this year. It looms as the shadow of the uprisings that followed the controversial election in 2009.

There is an undercurrent in Iranian society that has expressed their displeasure with the ruling regime. A warning to the candidates began the second debate, when The Friday Prayers’ Leader in Tehran said: “The debates should be on presidential issues…. But we must avoid acts that rattle society.”

The government believes that the debate in 2009 was the spark of that ignited that year’s uprising.

However, even after the warning, what what followed was the candidates focusing on shaming the each other.

One jab was at the current education minister, whose daughter was caught importing clothes illegally.  When responding to a question on education, the mayor of Tehran, Mohammad Bagher Ghalibaf, said, “Last week, police found out that education minister’s daughter imported tons of Italian clothes and stored them in her house… This, while her parents sent their daughters to school in turns, so that they can each use their one set of clothes and shoes.”

Each of the candidates attacked the others for corruption and scandals, during the debate. A few of the attacks and counterattacks from the candidates follow:

Hassan Rouhani stated early on, “When a member of the Majlis (parliament) went to Shiraz (south Iran) to give a speech, your friends attacked him by throwing stones at him.”

Ibrahim Raisi, known for his part in the 1988 massacre, spoke about the issue of government fraud. “The teachers’ fund was looted and officials took 8,000 billion tomans (2.4 billion dollars),” he said.

Mostafa Hashemitaba revealed an upcoming crisis, saying, “It is estimated that 10 million immigrants will be added to the cities, and this will create a struggle between the different tribes … threatening our internal security.” He also brought up a scandal that seemed to be the elephant in the room, “We had an accord called Cersent, which because of that, we were fined 14.5 billion dollars.”

Mostafa Mirsalim asked Rouhani to talk about the three to four billion dollars that was allegedly used for bypassing sanctions, asking exactly where this money ended up. He also attacked Rouhani about the country’s economic growth rate, and asked him to explain how out of 8% of economic growth, 6% comes from oil revenue. The IMF has estimated that Iran’s non-oil revenue is only 0.9%.

Rouhani and his deputy appeared to demonstrate restraint during the debate, despite the repeated attacks from the other candidates.

Ashena, Rouhani’s advisor, later explained why there is fear of an uprising, “Rouhani in today’s debate was worried and didn’t want the debate to be a shock to society.”