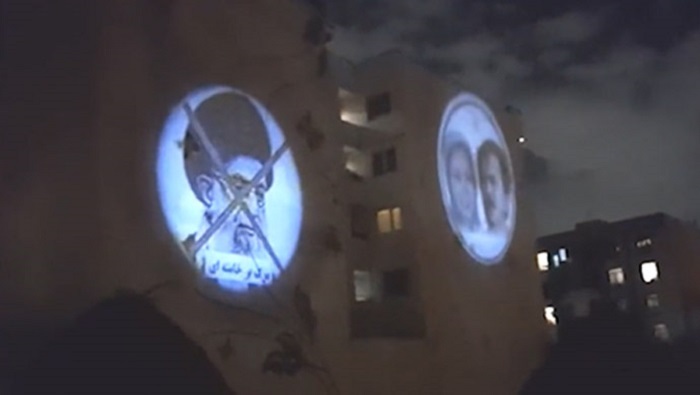 The projection of images of the leaders of Iran’s main opposition group, the People’s Mojahedin Organization of Iran (PMOI/MEK), on walls in Iran’s cities is one of the Iranian regime’s main concerns these days. The regime was alarmed by the projections in Tehran, prompting media outlets to write about them and warn about the security implications.

The MEK’s Resistance Units projected a large picture of the opposition’s leaders onto a wall at 9:30 p.m. on Monday, April 11 at the intersection of Iranshahr and East Kourosh Street. Even from a distance, this image was clearly visible.

The same images were projected on a Parsian brokerage building on the Jalal Al-Ahmad Highway and on a wall on the Resalat Highway on March 9 and March 29, along with the slogans ‘Down with Khamenei’ and ‘Long live Rajavi.’

These are just a few of the Resistance Units’ campaigns, which have chosen to challenge the regime’s repressive network. These actions, which have caused the regime much consternation as it tries to prevent these events, have had such a significant impact on the Iranian people’s morale.

In an article titled “Image projection, the sign of the enemy’s presence,” the state-run daily Bultan News expressed the regime’s concern in its April 13 issue. “On Monday night, April 10th, around 10 p.m., residents of the intersection of Iranshahr and East Kourosh Street witnessed a very large projection on one of the area’s walls,” it wrote. Witnesses claim that the image projection was so large that it could be seen from a long distance. How much longer do we have to see these out-of-the-box signals?”

“Inh te media silence, this news received no media coverage,” it continued. But, in order to educate the public, particularly those who observe the social and security realities of society, it is necessary to state that Mojahedin’s mischief is not pointless and aimless.

“They started from cyberspace and hyped it up. Today, they are taking practical action in the streets of Tehran. Is this not a sign of the enemy’s advancing? Should not the supporters and advisers of the government be worried about the consequences of such mischievous and norm-breaking actions?”

“Such MEK actions and the lack of response from the security structures only do not indicate the system’s weakness,” the Bultan News continued, explaining the regime’s security forces’ hopeless position in the face of these actions. The MEK wants to give the impression that their supporters, known as Resistance Units, are ready to fire at will and that no one can stop them.”

“It is good to make the most of the turmoil of recent years,” it added, expressing concern about a repeat of the November 2019 protests. But wasn’t it the MEK’s leader, Massoud Rajavi, who declared after the January 2018 riots that now is “the time for the expansion and leap of Resistance Units?”

“So, the MEK did not stop their strategy and they have continued their actions day by day with graffiti and installation of large banners, and now they are at a point where they penetrate the radio and television network and penetrate the ministries, and sometimes they show their presence in the streets of Tehran in this way.”

“By carrying out these persecutions, the MEK intend to pretend that they have the ability to take any action internally and weaken Mr. Raisi’s government, and externally present themselves as an alternative to the Islamic Republic to foreign counterparts,” it concluded.

“The bottom line is that the enemy acts with engineering. The actions of the enemy should not be underestimated. The situation is very serious. Especially since the JCPOA has not yet reached its outcome and the United States is committing new mischiefs every day. Let’s make another ambush out of enemy engineering.”