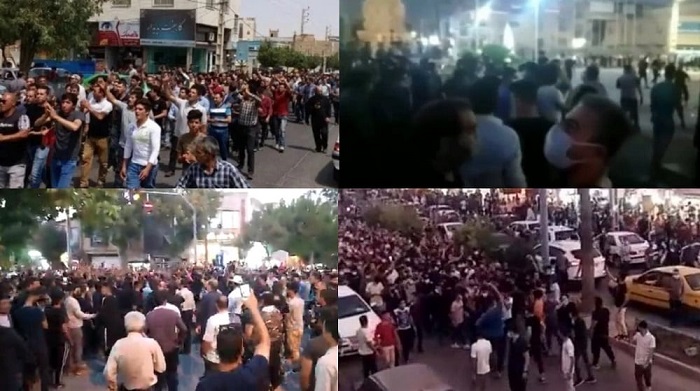 More than a dozen Iranian cities have seen protests in recent days as a result of rising prices. People quickly chanted slogans against officials such as the mullahs’ Supreme Leader Ali Khamenei and his president Ebrahim Raisi, because they are aware of the regime’s role in creating and worsening their economic woes.

These demonstrations erupted shortly after Raisi’s government abolished the preferential currency rate, which allowed essential goods like flour, wheat, and medicine to be imported at a lower cost. Raisi made a big deal about fighting corruption fuelled by the preferential rate, but his government would make $8 billion at the expense of the people.

As the protests spread across the country, the Iranian regime imposed an internet blackout in order to free itself from any restrictions on the spread of information about the protests both inside and outside Iran. Iran’s internet was disrupted, according to Netblocks, a company that monitors network connectivity around the world.

While Iranian activists spoke of internet disruption, which was confirmed by Netblocks and Amnesty International, Raisi’s communication minister rushed to the scene to deny the undeniable.“I vehemently deny that we have reduced the country’s bandwidth; the internet speed is based on the data volume.

There are now authorities around the world that measure Internet speed. On May 17, state-run Aftabnews quoted Isa Zarepour as saying, “Iran’s rank has increased even and has reached the 73rd rank.”Zarepour’s bold remarks were debunked by recent footage of the regime’s violent crackdown as well as reports from independent sources such as the Netblock.

Khamenei has long advocated for and insisted on “controlling the internet,” and his parliament recently passed the “internet protection plan bill.” He expressed his utter fear of social media in his speech on July 20, 2021, describing the need to control it as his regime’s “significant task at hand.” Officials should pay attention to it as a “key issue,” he added.

The mullahs are terrified of the Iranian opposition’s growing influence in Iran, in addition to the leak of their crimes online. Many regime officials have acknowledged that youth join Iran’s leading opposition group, the People’s Mojahedin of Iran (PMOI/MEK).

“People were on social media for hours.” Since we lost control of cyberspace, the enemy has been able to improvise and carry out its plans to influence the youth,” Khamenei’s mouthpiece, the state-run Kayhan daily, admitted on May 12.

“We must keep a close eye on the MEK’s activities.” They’re attempting to incite riots through social media. On social media, they keep talking about the food shortage,” Khamenei’s representative in Khoramabad, northwest Iran, Ahmadreza Shahrokhi, said during the Friday prayer sermon on May 13.

Iran’s ruling theocracy is not deliberately fighting technology. Tehran opposes anything that puts its rule in jeopardy. While the Iranian regime is terrified of cyberspace and its role in protests, the real threat to the regime is the Iranian opposition’s impact on society through social media and the internet’s role in breaking down the regime’s wall of disinformation and oppression.

⚠️ Confirmed: Real-time network data show a brief collapse in observable international connectivity on internet provider Rightel in #Iran, as well as a deterioration on other mobile and fixed-line providers; the slowdown may limit the free flow of information amid protests 📉 pic.twitter.com/uuzu2uYduB

In our time, social media and the internet have played a critical role in all conflicts. As a result, the international community has a moral obligation to assist Iranians who seek freedom and democracy.