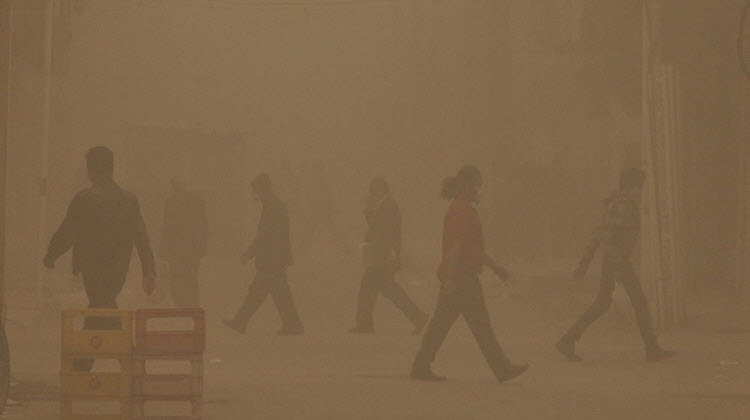 Western Iran has been covered in dust for the past few days because of some serious dust storms that have devastated the area. The quality of the air is horrendous and terribly dangerous, and banks, schools and offices have been forced to close. Power stations have been damaged and water supplies have been affected. Flights to and from the area have also had to be cancelled.

Even before the dust crisis, the beautiful Khuzestan province was suffering as a result of the Iranian regime’s terrible policies. The regime spends billions of dollars to fund wars and terrorism abroad – mainly in Syria, Iraq and Yemen, but it willingly and unashamedly neglects its own country.

The people of Iran are now getting fed up with the situation and an overwhelming amount of people are taking to the streets to protest against tyranny and to call for their rights to be respected.

The Iranian regime, despite being the world’s worst state sponsor of terrorism has spent years being appeased by the West. The West has also let the Iranian regime away with horrific human rights abuses.

Khuzestan is situated in the Fertile Crescent and has been completely destroyed by the regime’s destructive policies such as dam construction which is drying rivers up. The province is also dealing with serious economic consequences such as high unemployment, a housing and education crisis and a recession. The residents are also subject to frequent water and electricity cuts.

The Iranian regime is neglecting its own people, instead preferring to back the Syrian dictator Assad.

A former commander of intelligence for the Islamic Revolutionary Guard Corps (IRGC) said in 2013 that Iran sees Syria as its 35th province. He said: “Syria is our 35th province, and is a strategic province for us. If the enemy attacks us and seeks to take Syria or Khuzestan, our priority would be to keep Syria, because if we keep Syria, we can take back Khuzestan at a later date. But if we lose Syria, we would lose the capital Tehran.”

The Obama administration appeased Iran for years, hoping that “moderates” would step in and bring change. This has not happened, and will not happen for as long as the current regime is in place. The terrorist IRGC needs to be designated as such, and needs to be evicted from Iraq, Syria and Yemen urgently.

The Trump administration needs to continue being firm with Iran and must stand with the Iranian people who are desperate for democratic change. The worst mistake for the administration would be to continue with Obama’s policy of appeasement because it did nothing but embolden the regime.