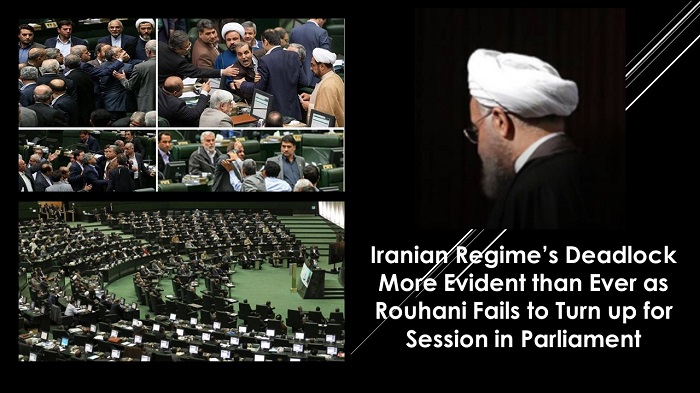 The latest session of Parliament in Iran has highlighted the extreme disaccord between the different factions of the Iranian regime. Iranian President Hassan Rouhani even refused to show up to the session that was holding a vote for his chosen candidate for the post of Minister of Industry, Mine and Trade.

His excuse for refusing to participate in the session was that he was advised by the National Coronavirus Task Force. Technically, his absence at the session made all proceedings illegal (according to the constitution), but it was held anyway.

Society is well and truly simmering with discontent. Over the past few years, there have been numerous strikes, protests, anti-government demonstrations, and several significant uprisings. https://t.co/uXP35bGUxb#Iran #MEK #COVID19 @USAdarFarsi pic.twitter.com/DfKAL9FZmh

Many of the Members of Parliament, especially from the rival faction, attacked the Iranian President. These members had been asked by Supreme Leader Ali Khamenei not to attack Rouhani, but they did so nevertheless.

Many MPs criticized Rouhani for not attending, with an MP from Garmsar in the province of Semnan saying that the President is once again hiding from the public. Ardashir Motahari highlighted that this is the second time Rouhani has “refused to show up before Majlis”.

Ardashir Motahari also said that the President’s popularity is low, saying that if Rouhani went to the streets he would hear the people curse him. “People do not trust you, not even a bit. How do you expect them to trust your proposed Minister who has spent two decades of his life abroad?”

These days #Rouhani tries to close his eyes on his previous promises. His government’s logic was to blame previous officials for sanctions, but now he takes no responsibilities and blames Washington DC for the current situation #IranSanctionshttps://t.co/KbobutQFxQ

However, his comments are ironic because Motahari does not care about the people. He is simply participating in a struggle for power because Motahari has occupied posts in the past in which the people have been severely oppressed.

Khamenei is very aware of the infighting and the deadlock that the regime finds itself in. The domestic dissent is a big enough hurdle for the regime to face, so the Supreme Leader is no doubt trying to avoid further conflict within the leadership.

If Rouhani’s comments to the U.N. about the #Iranian regime being an “axis of peace and stability” are ridiculous lies, it is only because they are the same lies that reflect the reality of the upper echelons of the regime itself #MEK #Iran https://t.co/EKdKtRtJT2 #FreeIran2020 pic.twitter.com/MJFlormiDl

There were calls for President Rouhani to be impeached earlier this year, but once again the Supreme Leader opted for the peaceful option. He said that the regime needs to present itself as “united against the enemy” and this despite the “differences” they have.

Society in Iran has been described as explosive and as in a powder keg state. This is a very accurate description as another uprising threatens to break out at any time. The people are angry with the regime. They want the regime to collapse so that they can move forward with their lives.

The People’s Mojahedin Organization of Iran (PMOI / MEK Iran), times and again stated that the regime is refusing to listen to the people of Iran who are struggling in many ways and it is right to worry about further dissent.

In yet another attempt to escape his own failures, Iranian regime’s president Hassan Rouhani once again blamed the U.S. administration for #Iran’s economic crisis.https://t.co/2koyme1AXM

Mrs. Maryam Rajavi the President-elect of the National Council of Resistance of Iran’s (NCRI): Today, not only the freedom of the people of Iran but their very lives and health, and the country’s economy and existence depend on the overthrow of the clerical regime. Likewise, global and regional peace and security and confronting natural disasters depend on regime change in Iran.