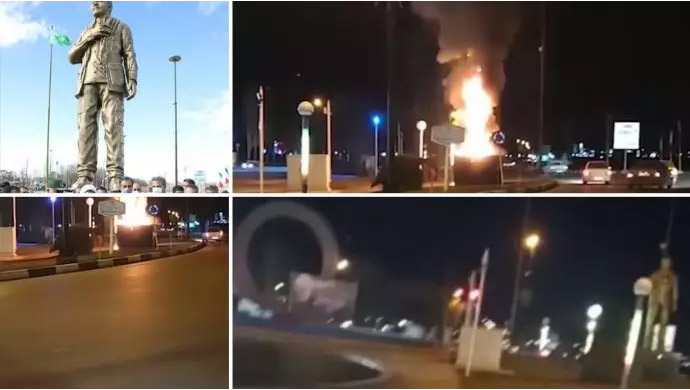 Residents of approximately 200 Iranian cities and villages took part in an uprising in November 2019, yelling chants such as “death to the dictator” and emphasizing the growing public support for regime change. In retaliation, government officials shot and killed around 1,500 individuals in just a few days.

The Iranian judiciary launched a campaign of systematic torture against individuals jailed for months later. The judiciary was led at the time by Ebrahim Raisi, who is most remembered for his role in the massacre of 30,000 political detainees in the summer of 1988. Raisi was installed as the next president less than two years after the uprising, in what many observers saw as a payoff for his decades of service to the regime’s repression of opposition.

In 2021 mullahs  carried out one execution each day

Many of the same commentators predicted that Raisi’s election would hasten a pattern of crackdowns that began in the aftermath of a January 2018 revolt and continued in the aftermath of the November 2019 uprising, protests over the Flight 752 tragedy, and beyond. The fact that the Iranian regime, which is already the foremost per capita executioner of Iranian civilians, has substantially increased executions in the immediate wake of Raisi’s nomination backs up those forecasts.

The Iranian regime carried out at least one execution each day on average in 2021, and estimates for the total number of state-sanctioned deaths are sure to rise as information from Iranian activist networks continues to leak into the media.

Vafaei, an activist to receive the death penalty in 2022

Mohammad Javad Vafaei, an activist, became the first known political prisoner to receive the death penalty in 2022 on January 9. After being accused of helping the MEK and “corruption on earth,” he had already spent nearly two years in detention without being convicted.

Three female activists were sentenced to prison terms ranging from two to five years just days before Vafaei’s conviction, and just one day after the Soleimani statue was torched, on charges of “conspiracy to act against national security” through cooperation with the MEK. The youngest of these ladies is 59 years old, while the oldest is 69, and all three have already served time in prison as a result of their 1980s MEK youth activism.

As authorities led by Ebrahim Raisi continue to tighten down on anti-government agitation, particularly that linked to the MEK, this practice is likely to increase in tandem with the rate of formal executions.

During the 1988 tragedy, the MEK was the primary target of the “death commission,” of which Raisi was a member. In both 2018 and 2019, the Organization was largely credited with popularizing anti-government chants and supporting countrywide upheavals. In the weeks leading up to the installation of Soleimani’s statue in Shahr-e Kord, the MEK’s Resistance Units also burnt dozens of photographs of him.

Recent and ongoing retaliation shows that the regime is stepping up its efforts to dismantle the MEK network and punish any public opposition. This cannot be allowed to happen if the world community remains silent. Instead, the UN and its major member states must put pressure on Iran’s leadership over past human rights violations to show that more of the same will not be accepted, especially at a time when an increasing number of Iranian citizens are calling for freedom and democracy in their country. It’s time to put a stop to the culture of impunity.

Ebrahim Raisi stepped into Iran’s political scene after the 1979 revolution against the monarchy as a pro-Khomeini cleric who would carry out his mentor’s every command.