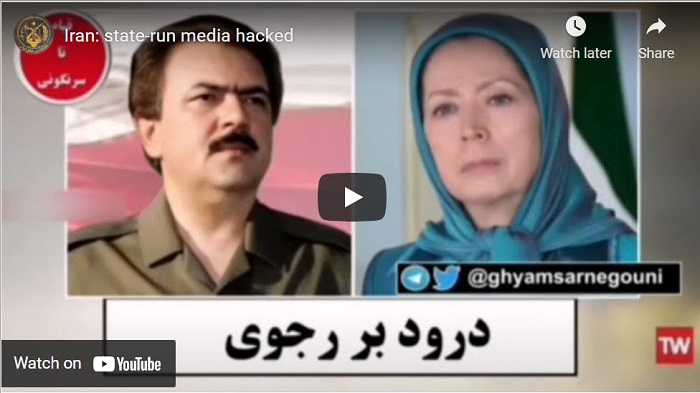 The Iranian regime’s state television Channel 1 and the Quran Channel were both disrupted on Thursday, January 27. A cross-out image of Iran’s supreme leader, Ali Khamenei, is followed by photographs of Massoud Rajavi, the Iranian Resistance’s leader, and Mrs. Maryam Rajavi, the President-elect of the National Council of Resistance of Iran (NCRI). Audio slogans such as “Death to Khamenei!” and “Viva Rajavi!” followed the images.

“Given that the security architecture was created to safeguard the broadcaster, this is not a simple undertaking,” said Reza Alidadi, the state’s Radio, and Television technical director. “Only those who hold the technology have the ability to destroy the systems.” We’re looking into it right now to figure out what’s causing the problem.”

The incident was also reported by Tasnim News Agency, which stated that the prospect of “human element infiltration” should be addressed, and urged for the necessary inquiry. According to insiders providing updates from inside Iran’s TV and radio networks, “more than 400 TV and radio servers were offline and entirely destroyed.”

An official: The issue is being investigated

“The situation is being investigated by our colleagues. Only the proprietors of this technology could abuse and harm the backdoors and features that have been implemented on the systems,” Ali Dadi, deputy chief of the Islamic Republic of Iran Broadcasting (IRIB), said the official television channel IRINN on Thursday.

Hasty arrests and interrogations of employees

Security and intelligence agents’ squads have shuttered all entrances and exits of the state’s broadcasting organization, Islamic Republic of Iran Broadcasting (IRIB), according to reports from inside Iran, and have made hasty arrests and interrogations of innocent IRIB employees.

“How could the Monafeqin (meaning the Hypocrites, the disparaging term used by the Iranian regime for the People’s Mojahedin of Iran (PMOI / MEK Iran)) reach the radio and television antennas?!,” the Akharin Khabar (Latest News) Telegram group said this afternoon. The technical and broadcasting systems are totally isolated, have sufficient security protocols installed, and are not connected to the Internet. The IRIB is examining the issue, and detailed information on the many elements of the sabotage has yet to be revealed, but sabotage appears to be the most likely scenario.”