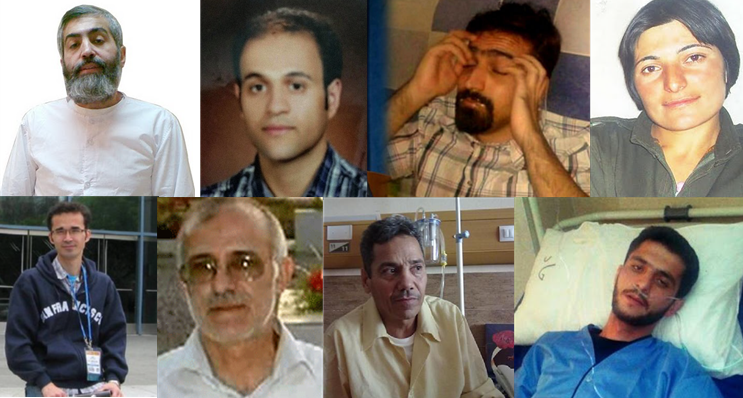 In the statement on the National Council of Resistance of Iran’s (NCRI) website, they highlight that depriving prisoners in need of medical care and torturing them to death is “a clear case of a crime against humanity”. Because of the despicable behaviour of the regime and their antihuman methods of control, many lives of prisoners are in danger.

The case of Afshin Sohrabzadeh, aged 26, is highlighted. He is a political prisoner suffering from colon cancer. He has been refused access to hospital treatment and has now become very weak because of internal bleeding and severe weight loss. Seven years ago he was arrested and was sentenced to 25 years in prison. The IRGC’s (Islamic Revolutionary Guard Corps) intelligence arrested his brother, Kaveh Sohrabzadeh, on 7th May for disseminating information about his suffering brother.

Omid Kokabee, 34, is a nuclear physicist that was arrested five years ago for refusing to help the regime in a bomb-making project. He was subject to a lot of physical and mental torture and was sentenced to 10 years in prison on a ridiculous charge of “having links to a hostile government and illegitimate earnings”. He has been suffering from cancer of the kidney and in recent weeks had to have his right kidney removed. It has been reported that henchmen chained him to his bed in hospital.

Alireza Golipour, aged 30, is suffering from lung cancer and chronic nose bleeds and continues to be deprived of medical care. As a student and worker in the intelligence ministry, he was arrested in the 2009 uprising. He was then arrested again in October 2012 and was subsequently subjected to several months of torture and solitary confinement. He has since been moved to Evin Prison where he is harassed by the “regime’s mafia-like gangs”. His family also receive threats.

Ali Moezzi, 66, is one of the political prisoners of the 1980s. One of his sentences was for visiting his children in Camp Ashraf. Mr. Moezzi is suffering from bladder carcinoma and prostate and renal problems. He has been denied crucial surgery. His sentence has been served and he should have been released, but henchmen fabricated charges against him to keep him in prison for at least another year.

Zeinab Jalalian, 44, is a Kurdish political prisoner who suffers suffering from eye disease and acute duodenum disease. She is on the verge of losing her eyesight. The regime’s henchmen have “conditioned her dispatch to a hospital to holding hostage a young member of her family”. She received a life sentence for the mullah-fabricated charge of Moharebeh after her arrest in March 2008.

Abdolfattah Soltani, 63, a lawyer, suffers from disc prolapse in the back and neck, unstable blood pressure, acute digestive problems and has recently lost a drastic amount of weight. He was arrested in June 2009 and condemned to 10 years in prison for “propaganda activity against the system”. He was accused of “defending the rights of imprisoned workers, students and journalists”.

Mohsen Daneshpour Moghaddam, 73, suffers from vasoconstriction, cardiac disease, knee arthritis, and disc prolapse. Many of his conditions have been caused by the harsh prison conditions he has endured as well as old age. He was arrested in December 2009 with his wife, son and daughter-in-law for having contacts with the PMOI/MEK and was sentenced to death.

Massoud Arab Choubdar fell unconscious in Gohardasht (Rajai Shahr) Prison because of a severe drop in blood pressure. His right hand is also in a bad condition due to torture. On 28th April he was turned away from the prison infirmary. He is now staging a hunger strike “in protest to being transferred to the ordinary criminals’ ward”. He is serving a three year sentence after being arrested in 2013.

Ayatollah Hossein Kazemeyni Boroujerdi is suffering from cardiac, lung and renal diseases, diabetes, asthma, Parkinson and poor eyesight. In April this year he was poisoned and has since had problems with pain in his lower limbs and his eyesight has drastically deteriorated. In a “sham trial” in 2006 he was sentenced to 11 years in prison.