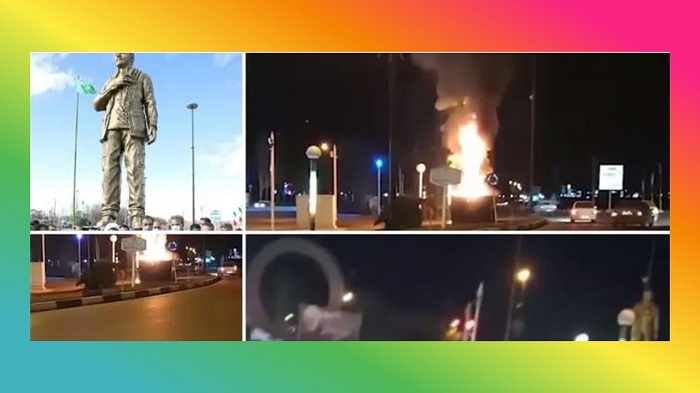 Authorities in Shahrekord, Charmahal, and Bakhtiari Provinces presented a giant statue of Qassem Soleimani, the terrorist Quds Force’s eliminated commander, on Wednesday, January 5.
The statue was intended to honor the regime’s terror master, who was killed in a drone assault in January 2020 and took a year to build at a significant expense to the Iranian people. The statue was unveiled with a dramatic ceremony in the presence of religious regime officials, with subsequent celebrations planned for the square where the statue was unveiled.

Iranian Resistance Units set fire to the statue at 9:30 p.m

Iranian Resistance Units set fire to the statue at 9:30 p.m. The regime’s hurried reactions were sparked by the Resistance Units’ daring act, which they carried out at considerable risk to their lives.
“Unidentified individuals set fire to the statue of Lt. Gen. Haj Qassem Soleimani, which was unveiled yesterday morning, January 5, in the presence of officials from the Province in Hazrat Qamarbani Hashem Square in Shahrekord,” the semi-official News Agency ISNA reported on Thursday.
On Thursday, Mohammad Ali Nekonam, the Iranian regime’s supreme leader’s representative in Shahr-e Kord, issued a statement calling the torching of the statue “a crime” that “would strengthen Haj Qassem’s popularity among people.”

The popular reaction has revealed how the people truly feel

The government has gone to considerable lengths to promote Soleimani as a national hero and popular figure since his detention. While the Iranian people are struggling to make ends meet, the dictatorship has spent vast sums of money from the country’s resources to erect posters and sculptures of the terror master. Simultaneously, the dictatorship mobilized its supporters overseas to praise Soleimani. However, the popular reaction to Soleimani’s posters has revealed how the Iranian people truly feel about criminals like him.

Not only in Iran but also in neighbouring countries where the regime has spent vast sums on propaganda to glorify the terrorist leader, torn and burned posters of Soleimani have become commonplace.
The regime’s admiration for Soleimani exemplifies its character and the chasm that exists between Iran’s authorities and its people. Soleimani had a critical part in the brutal repression of various anti-regime demonstrations in Iran over the years as the head of the Revolutionary Guards Quds Force (IRGC-QF), which resulted in 1,500 protestors being slain during the November 2019 revolt alone.

Soleimani was in charge of international terrorist activities

Soleimani was also in charge of the regime’s international terror activities. He was the mastermind behind a series of attacks in Iraq against members of the People’s Mojahedin of Iran (PMOI / MEK Iran). From 2012 through 2016, he directly oversaw the devastating attack on Camp Ashraf in September 2013 and rocket attacks on Camp Liberty. He was also responsible for the founding of Hashd al-Shaabi, an Iraqi militia force funded by Iran that has terrorized Iraqis and carried out numerous fatal operations around the country.

Soleimani oversaw the regime’s engagement in Syria, propping up the dictator Bashar al-Assad against the opposition forces by providing his murderous regime weapons, troops, and cash. Soleimani’s pivotal role in the deadly chemical attack in Ghouta in 2013 earned him the nickname “child killer.”
Soleimani was a crucial figure in the government’s domestic and foreign policies, as numerous regime leaders, including supreme leader Ali Khamenei, have admitted. His assassination dealt the regime irreversible damage.