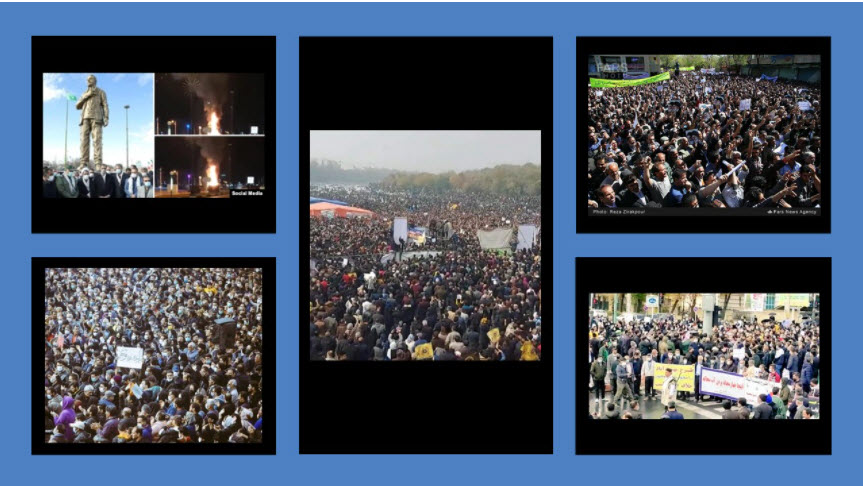 On January 1, the state-run Setar-e Sobh daily admitted, “The country’s problems have become deeper than before.” This acknowledgment by the Iranian regime’s state-run media, which has previously whitewashed the mullahs’ misdeeds and hidden the truth of Iran’s volatile society, demonstrates the severity of the current problems.

There is a wealthy group separated from Other class

Iran’s state media and regime leaders are concerned about the possibility of another uprising. “The current amount of economic stress on the general public is unprecedented. On January 1, the regime’s former MP Parvaneh Salahshouri told the Setar-e Sobh daily that “we are now witnessing a surge in the population of disadvantaged deciles in society.”

“In this country, there is a small wealthy group that is economically separated from the majority of the population. As a result, when economic pressures mount, many people suffer a variety of livelihood issues.”

This financial situation is a symptom of a big disaster

“Field observations on inflation, discrimination, and diminishing purchasing power reveal that things are just getting worse.” Around 85% of the population appears to be dissatisfied with the country’s economic and living situations. Is it true that our rulers are aware of widespread distrust?” she continued.”

Sanctions would not reform the country’s economy

“Officials do not pay exorbitant fees.” You are imposing your archaic beliefs in the country because you are unaware of economic challenges or unemployment. On January 1, the state-run Arman-e Meli daily wrote, “Sanctions and large-scale embezzlement would not reform the country’s economy.”The demolition of a helpless, mentally ill man’s shop in Maraghe, among a slew of other such measures, has made life unpleasant for the poor.

” This is only the tip of the iceberg in terms of possibilities. Increasing inflation and skyrocketing costs have made life difficult for millions of people,” Arman-e Meli adds.”Labor activists claim that this year’s food baskets cost 115 million rials per month, which many workers cannot afford.” The rising expense of life does not wait for the consent of the [government]. Inflation has surpassed 45 percent, while earnings have been unchanged since the beginning of the year. According to estimates, over 26 million Iranians lived in poverty in 2019. On January 2, the Hamdeli daily said that “this number has undoubtedly climbed greatly in 2020 and 2021.”

Do you feel suffocated these days from the economic situation, air pollution, landslides, or the prospect of the future, as problems warp around your neck like a rope?” Arman-e Meli daily wrote on January 3.”The ropes that rulers, politicians, bureaucrats, contractors, and advisors have tied around our necks are causing us to feel suffocated.” The governments have funded these individuals, according to Arman-e Meli’s article.

Economic statistics, such as the high unemployment rate, show how Iran’s economy fluctuates between collapse and disaster under the mullahs’ management. Iranians have suffered for decades as a result of thievery, corruption, and incompetence. The regime’s officials and their kin live in luxury and opulence while the populace struggle with hardship. The country’s economic crisis has exacerbated society’s tumultuous state. The uprising in November 2019 exposed the Iranian people’s contempt for the mullahs’ regime. Since then, there have been further protests, indicating a rise in societal unrest.

Who is Ali Khamenei, the supreme leader of Iran’s regime? Ali Khamenei is the current Supreme Leader of the mullahs’ regime in Iran. Khamenei is ultimately responsible for all human rights violations across Iran and terrorist meddling in other countries.