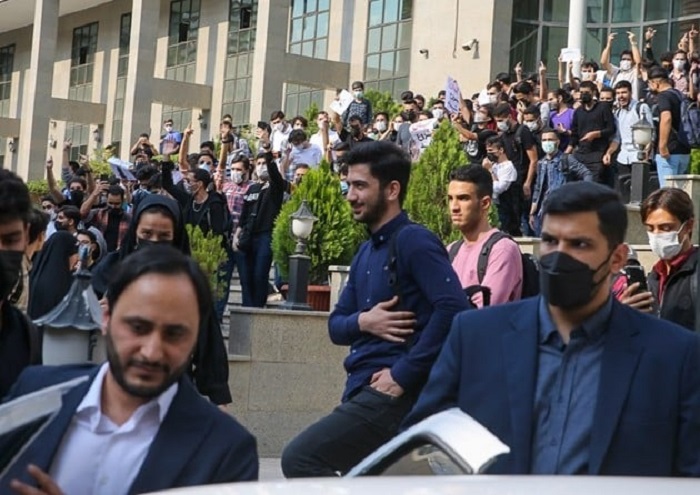 Ali Bahadori-Jahromi, the Raisi government’s spokesperson, visited two universities in Tehran and Qom on October 24 and 25. Iranian university students reacted by yelling “get the lost murderer,” exposing the regime’s weakness. It demonstrated people’s determination to bring about regime change.

They had attempted to intimidate students by filling the conference room with regime supporters who had gained access to those universities through special privileges granted to state-affiliated thugs.

Iranian students, on the other hand, did not fall for Jahromi’s pitiful gestures or bow when security forces showed their teeth. They stormed both universities’ meeting places, chanting anti-regime slogans and emphasizing that the university is not a place for the “government of murderers” and its spokesperson.

Under the Shah’s regime, the founders of Iran’s most prominent opposition groups, such as the People’s Mojahedin of Iran (PMOI/MEK) and Fadaiyan-e-Khalq, were university students who paved the way for Iran’s revolution in 1979.

His successors sent thugs to universities across Iran under the banner of “unity between religious seminaries and universities.” Iran’s ruling theocracy also stationed security forces inside universities, handpicked teachers, and fired dissident professors.

Nonetheless, these actions failed to silence dissent in Iranian universities. Iranian university students took to the streets in July 1999 and clashed with security forces. A movement that began on the campus of Tehran University quickly gained national traction and shook the ruling establishment. Regrettably, the incident prompted the clerical regime to send Revolutionary Guards (IRGC) and Basij paramilitaries to universities to work as security guards, students, or lecturers.

Until the first major series of protests across Iran in 2018, the regime nearly had control of universities through excessive violence and a crackdown on student unions. University students in Tehran acted as sledgehammers, shattering the fearful atmosphere.

They delivered the final nail in the coffin of “reformism,” which the regime had used for far too long to deceive Iranian society and the international community, with the popular slogan “Reformist, Principalist, the game is over.”

With the deaths of over 1500 protesters, Iranian university students took to the streets in January 2020 in response to the IRGC’s downing of a passenger jet and demanded regime change.

As protests spread across Iran, universities and their students have risen to take their rightful place as a “bastion of freedom.” Despite the regime’s harsh crackdown, they hold daily protests and adamantly demand regime change.

Iranian students are assuming the challenges and paying the price for a future in the making as knowledge necessitates responsibility. Leaders around the world are aware of what is at risk after dealing with the most active state sponsor of terrorism and Islamic extremism. The international community must fulfill its moral and political obligations by recognizing the Iranian people’s right to self-defense and future self-determination.