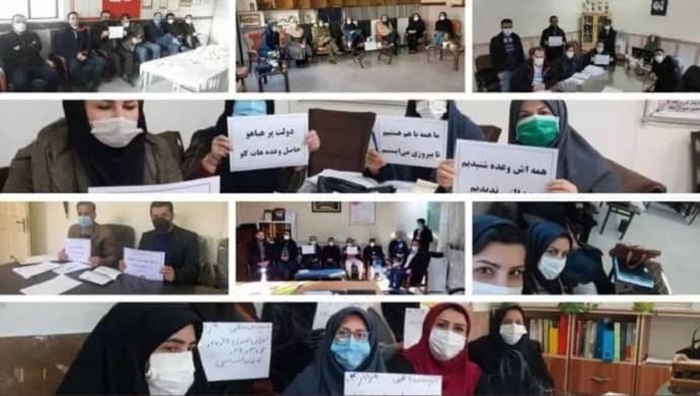 On Saturday, January 29, teachers in dozens of locations around Iran went on strike and organized protests in schools, reaffirming demands they’ve been making for years. One of the primary demands of the protesting teachers is the adoption of the “classification plan,” which is meant to rearrange their compensation.

They also want pensions for retired teachers to be adjusted to reflect rising inflation and basic goods prices.

The Majlis (parliament) of the dictatorship recently authorized a budget that only fulfills a fraction of the demands of hundreds of thousands of teachers. The instructors are also lobbying for the release of their colleagues who were arrested for protesting.

January 29 – #Iran
Teachers and educators across the country are on strike, protesting at their worksites. Retired teachers are also protesting, joining the nationwide call for fair pay & pensions, especially with inflation skyrocketing.#IranProtests #اعتراضات_سراسری_معلمان pic.twitter.com/qBvoboW4x7

Active and retired teachers are among those who have been affected by the economic crisis and the regime’s inaction in drafting legislation and allocating resources to enhance their working circumstances.

Mrs. Maryam Rajavi, the president-elect of Iran’s National Council of Resistance of Iran (NCRI), has long commended Iranian teachers for demonstrating that they “would not back down” in the face of the religious regime’s “deceptive plots, threats, and suppressive measures.” “Until their demands are granted, the teachers’ movement will continue.”

Mrs. Rajavi also stated that the teachers’ movement reflects “the general Iranian public’s determination to overthrow the clerical regime, which is the main cause of oppression, corruption, poverty, unemployment, and poverty,” and she encouraged students and youth to join the teachers in their protests.

With their courageous protests today, Iranian teachers showed that they will not back down despite the clerical regime’s deceptive plans, threats, & suppressive measures. The teachers’ movement will carry on until their demands are met. #IranProtests pic.twitter.com/OB4i7VlTP6

The Majlis enacted the “Teachers Ranking” bill last month, which is meant to solve many of the issues that teachers have experienced in recent years.

Teachers will be grouped into five ranks based on “general, specialized, and professional credentials, experience, and competitive function,” according to the bill. Salaries will be set based on the teachers’ ratings.

While the administration brags about the bill and its accomplishments, Iranian teachers accuse the regime of failing to meet their requirements. The Iranian Teachers Coordination Council described the bill as deceptive and inappropriate, and stated that the administration has warned that this erroneous plan will not be implemented during the current Persian year, which runs until March 2022.

In the coming Persian year, beginning in March 2022, a total of 250 trillion rials will be distributed to about 734,000 teachers across Iran, according to the bill. It does not, however, take into account the tens of thousands of instructors who operate on unofficial contracts because the education ministry refuses to hire them despite the fact that they have passed the test.

“There is no funding to implement the law in the current year, and the government has no credit for the year 1400 [March 2021-March 2022],” Hossein Arab Assadi, deputy of the Employment Affairs Organization, stated after the measure was enacted.

Majlis Speaker Mohammad Bagher Ghalibaf previously stated that the Majlis would not be able to adjust the annual budget of 250 trillion rials allotted to this plan.

The regime has attempted to intimidate teachers by labeling their gatherings a “security danger” and planning for retaliation.

The state-run Keyhan daily warned on December 15 that the demonstrations are being hijacked and managed by “state foes.”

Meanwhile, the Revolutionary Guards’ (IRGC)-affiliated Javan newspaper attempted to downplay the teachers’ demands, claiming that 72 percent of the increased education funding had been allocated to teachers. The publication commented, “Instead of allocating our credit to expand the school system and improve the quality of education, we are spending it on salaries.”

Javan, ironically, makes no mention of the IRGC’s budget, which has increased by 240 percent year over year to spend billions on overseas terrorism, ballistic missiles, internet control, and home repression.