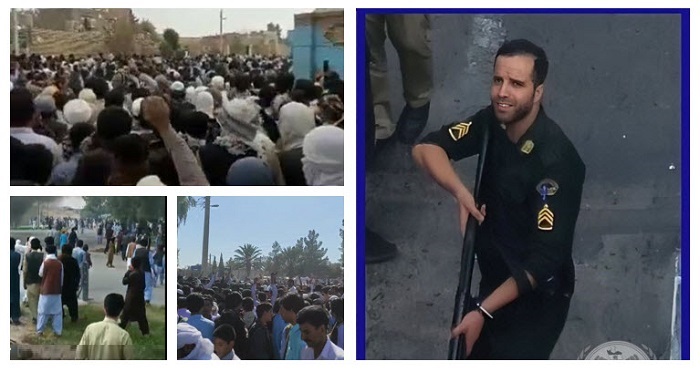 November 7, marks the 53rd day of anti-regime protests that were triggered by the heinous murder of Mahsa Amini. The 22-year-old woman from the city of Saqqez in Kurdistan Province, western Iran, who traveled to Tehran with her family, was arrested on Tuesday, September 13, at the entry of Haqqani Highway by the regime’s so-called “Guidance Patrol” and transferred to the “Moral Security” agency.

Protesting her arrest, Amini was severely beaten by the security forces in a van and was taken to the capital’s Kasra Hospital due to the severity of her injuries. After initial examinations, doctors declared that Amini had suffered a stroke and was brain dead at the same time. Amini died on Friday, September 16.

Shortly after, protests broke out and have now spread to 216 cities, according to the Iranian opposition People’s Mojahedin of Iran (PMOI/MEK). The regime has killed over 550 people, injured tens of thousands, and imprisoned over 30,000. The MEK has released the names of 368 protesters who were killed. Locals were joined by Lahijan citizens to pay tribute to the late Erfan Zamani, 37, who was killed by, forces in Lahijan on November 3.

Authorities sealed off the city early in the morning, setting up checkpoints at the entrance gates and inspecting citizens. Defiant youths, on the other hand, paid tribute to the late Erfan with anti-regime slogans such as “Death to Khamenei,” and “Death to the dictator.”

Throughout the day, more protests were reported in many cities, particularly in several districts of Tehran. Protests against the mullahs’ regime were also reported in Tabriz, Isfahan, Shiraz Mashhad, Sarbaz, Behbahan, Yazd, Bushehr, Karaj, and Baba Heydar.

Over 550 people killed and more than 30,000 arrested by the regime's forces. The PMOI/MEK has published the names of 375 killed protesters.#IranRevoIution#آزادی_آزادی_آزادی pic.twitter.com/2W0crzAO4y

Freedom-loving Iranians gathered in Washington, DC, Berlin, London, and Oslo to support anti-regime demonstrations in Iran and to call on the international community to hold the criminal regime accountable. In Dubai, the National Iranian Beach Soccer Team players refused to celebrate the championship in memory of hundreds of slain freedom-loving demonstrators, and spectators chanted, “This is the year of [Khamenei] overthrow.”

Students at the Allameh Tabatabaei-Literature Faculty are on strike despite the regime’s oppressive measures, which include the suspension of more than 50 students for participating in protests.

To quell protests, the regime stationed mounted police in Sadeghiyeh-2nd Sq. Citizens claim that the regime has run out of motorcycles and gas and has had to resort to horses. Citizens gather outside the local governorate to pay tribute to Erfan Zamani, 37, and chant “Death to the dictator!” Security forces opened fire in response.

The Iranian people’s powerful uprising is forging ahead.
It is a revolution to establish freedom and democracy in Iran#IranRevolution pic.twitter.com/FxLcZS5AKw

Mrs. Maryam Rajavi, President-elect of the National Council of Resistance of Iran (NCRI), praised the courageous people of Siahkal and their slain protester, Erfan Zamani.

“#Iran uprising continued on Day 53 and will carry on to establish a democratic republic. Universities in Tehran & other cities cried out for “freedom.” The brave people of Siahkal commemorated slain protestor #ErfanZamani despite the IRGC attack, chanting “Death to the dictator,” she said.