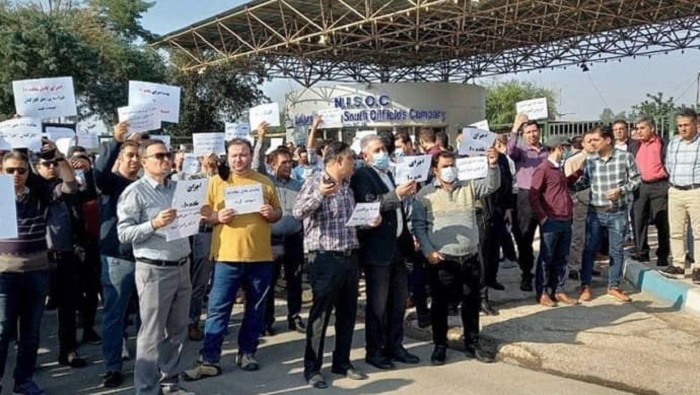 Mrs. Maryam Rajavi praised the oil industry workers, saying that the only way to achieve workers’ and toilers’ rights is to overthrow the Velayat-e faqih system (absolute rule of clergy), which has resulted in oppression, discrimination, embezzlement, and corruption.

In honor of the two uprising martyrs, Majidreza Rahnavard and Mohsen Shekari, defiant Kermanshah youths set fire to the hideout of two regime agents and the seminary in Golpayegan, central Iran, with Molotov cocktails.

In Tehran, defiant youths chanted “Death to Khamenei” in the subway. Shiraz University medical students demonstrated in support of one of the imprisoned students who was charged as Mohareb (waging war on God) and demanded his release. Students at Kermanshah’s Academy of Fine Arts demonstrated, chanting, “We have not made the sacrifice to compromise and praise the murderous leader,” and “They took our Negin (fellow student) and returned her corpse.”

December 17 – Asaluyeh, southwest #Iran
Oil industry workers and employees are on strikes and protests the regime's refusal to respond to their demands.
"We don't want a lying minister!"
"Enough with promises! We have nothing to eat!"#IranRevolution2022 pic.twitter.com/5W4c4kt6mP

In several wards of Karaj Central Prison, prisoners protested the execution of four prisoners and blocked the entrance to prevent the agents from entering. “Death to Khamenei,” they chanted. The suppressive forces attacked and opened fire on the prisoners, injuring a large number of them.

On Friday, young people in Marvdasht used improvised bombs to attack the city’s seminary. In Kermanshah, youths set fire to a poster depicting Qassem Soleimani, the former Commander of the Quds force. Cries of “Death to the dictator” echoed from the buildings of Tehran’s Monirieh district on Friday evening.

Donya Farhadi, a 22-year-old female student at Ahvaz’s Azad University, was buried in Izeh’s Rozeh Al-Zahra Cemetery on Friday in front of a large crowd. The regime’s repressive agents kidnapped Donya Farhadi and then dumped her body in the Karun river.

“According to the statement of the Isfahan Province IRGC, 23 cybercriminals… who sought to incite young people to participate in riots and also, in line with the enemies, called for forced strikes, carried out extensive activities in cyberspace and by spreading false information, they sought to create a sense of hopelessness and despair among the people, were arrested, and their Instagram was blocked, and additional punitive measures were imposed,” the state-run website Tabnak wrote on December 16.