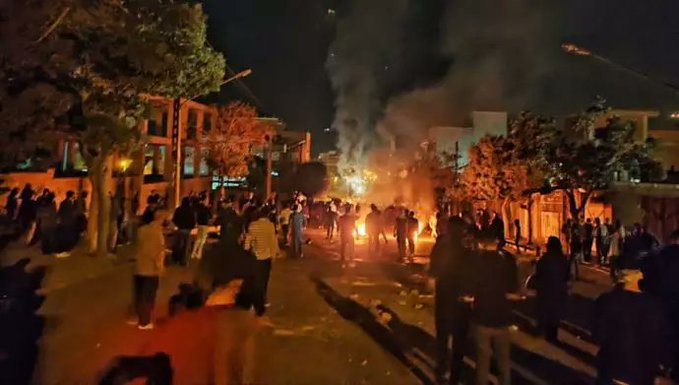 On Saturday, the 72nd day of the Iranian uprising, people across the country joined in solidarity with their brave Kurdish compatriots in the west and northwest, as well as the Baluchi community in southeast Iran.

Protests in Zahedan continued on Saturday with more strikes by noble merchants and store owners. Students at Amir Kabir University in Tehran were seen boycotting classes to protest the arrest of their classmates and to express solidarity with the ongoing Iranian revolution. Protests were also held at Pardis Faraby University, the University of Science and Culture, and the Isfahan University of Technology.

In other news, around 4,000 workers at Isfahan’s famous steel mill went on strike on Saturday, according to reports. Protests in various cities continued throughout the day and intensified at night. Rallies were reported every night in Tehran, Mashhad, Isfahan, and Karaj. Protesters chanted anti-regime slogans and expressed solidarity with the people of Sistan and Baluchestan province and the Kurdish cities of Iran.

Meanwhile, the situation in Zahedan remains extremely tense. Protests continued despite the regime’s security forces brutal repression. Security forces are seen opening fire on protesters in videos. Meanwhile, protesters are taking refuge in alleys and continuing their rallies with bare hands and rocks. According to local reports, security forces have injured and killed dozens of people during today’s protests.

According to other reports, protests are taking place in Tehran’s Naziabad district. In recent weeks, Naziabad has been one of Tehran’s most active districts. Despite the heavy presence of security forces, locals rallied in the streets today and chanted anti-regime slogans such as “Death to the dictator!” and “Freedom! Freedom! Freedom!”

Iranian opposition President-elect Maryam Rajavi of the National Council of Resistance of Iran (NCRI) praised Iran’s Baluch community for continuing anti-regime protests despite the crackdown and expressing solidarity with their Iranian compatriots, particularly the brave Kurds.

“Once again, today, our brave Baluch compatriots took to the streets of Zahedan, Khash, Iranshahr, Chabahar, Pishin, and other cities. With chants of ‘Death to Khamenei,’ ‘Bassij, IRGC, you are our ISIS,’ and ‘We support Kurdistan,’ they challenged the brutal revolutionary guards,” she said.

Once again, today, our brave Baluch compatriots took to the streets of #Zahedan, #Khash, Iranshahr, Chabahar, Pishin, … With chants of “Death to Khamenei,” “Bassij, IRGC, you are our ISIS,” and “We support Kurdistan,” they challenged the brutal revolutionary guards. pic.twitter.com/Q4kbBMVC0S

“They showed that they have no qualms about paying any price to achieve a free and democratic Iran. I urge the youth to rush to the aid of the courageous Baluch protesters, especially those wounded,” the NCRI President-elect added.

These protests began following the death of Mahsa Amini. The 22-year-old woman from the city of Saqqez in Kurdistan Province was brutally beaten by the morality police and died of her wounds in a Tehran hospital on September 16. The event triggered protests that quickly spread across Iran and rekindled the people’s desire to overthrow the regime.