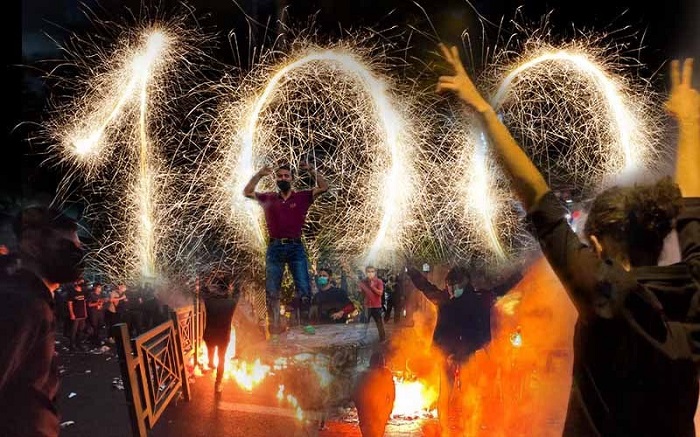 “This weekend marks 100 days since Mahsa Amini died, and protestors have called for greater freedoms and the demise of the theocratic regime,” said Middle East observer Jonathan Harounoff. “With very early cracks appearing among the leadership/IRGC and protests showing no signs of abating, 2023 may be a transformative year in Iran.”

According to the People’s Mojahedin of Iran (PMOI/MEK), the protests have spread to 282 cities. The regime has killed over 750 citizens, injured tens of thousands, and detained over 30,000. The names of 603 protesters killed have been published by the MEK.

Despite the regime’s unprecedented oppressive measures, such as firing birdshot and live ammo at defenseless citizens, including children, arbitrarily arresting tens of thousands of people, and imposing extrajudicial death sentences and hastily hanging protesters, anti-regime demonstrations, strikes, and activities continue across the country.

The regime’s judiciary reportedly upheld the death penalty against Mohammad Ghobadlu, 22, on the grounds of “waging war against God” and “corruption on earth.” In an emotional video, her mother begs everyone to help his son and warns about her loved one’s fate.

In another moving video, the parents of Javad Rouhi, 35, beg the public to be their voice. Javad is facing false charges of “moharebeh,” which is punishable by death. “The Iranian regime is afraid and cowardly murdering its own people that choose to stand for their freedom. The regime has lost any semblance of legitimacy it once had,” said U.S. Senator Bill Cassidy.

In continuation of the nationwide protests, armed locals opened fire on a vehicle of the security forces on Fazeli Street, killing two regime agents, according to social media reports. Protests and rallies were held in various districts throughout Tehran. Some used Molotov cocktails to target a site of the regime’s IRGC paramilitary Basij units.

Locals braved the snow and chanted “death to Khamenei” in Karaj, west of Tehran. Protesters staged a rally in Fardis township, chanting, “Death to the murderous Khamenei, death to the child-killing regime.” Locals in the city’s Golshahr district chanted, “This is the year Seyed Ali (Khamenei) is overthrown!”

Locals in Sanandaj, western Iran, continued to demonstrate against the regime in the city’s Nabovvat Square. They also set fires and blocked the highway.

Merry Christmas!
As the promise of mankind's glorious future, #Christmas this year heralds the end of the religious tyranny ruling #Iran, both for Iranians and the world at large. pic.twitter.com/PJVDs0vZwR

Iranian opposition President-elect Maryam Rajavi of the National Council of Resistance of Iran (NCRI), paid tribute in her Christmas message to “all the brave women, girls, and young people who shattered the walls of fear rebelled against the darkness of despair and powerlessness and led the battle to uproot religious tyranny.”

She also urged the international community to stand with the Iranian people. “I appeal to all my Christian brothers and sisters around the world to lend support to the Iranian uprising,” Mrs. Rajavi said.