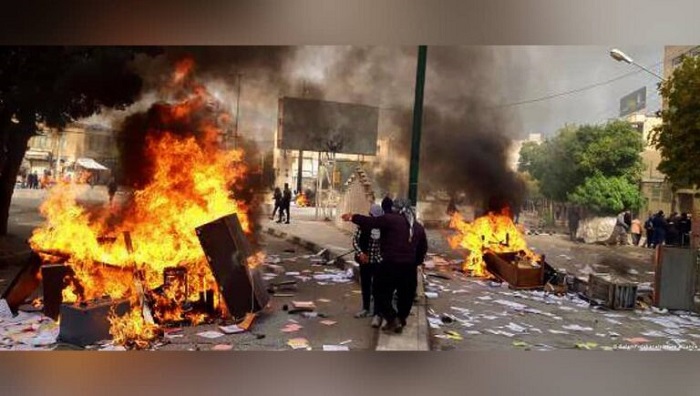 On Thursday, the ongoing nationwide uprising in Iran reached its 49th day, following a busy night of protest gatherings, roadblocks, and other protesting measures by the Iranian people.

In a significant development in Washington, over 2,000 academics from universities across the country have written to U.S. President Joe Biden urging him to do more to support the Iranian people engaged in anti-government protests across the country, emphasizing that many of these protesters are coming out of Iranian universities and schools as young Iranians take to the streets and clash with the country’s brutal security forces.

After dark, people in several districts of the capital Tehran, as well as other cities such as Karaj, Tabriz, Mashhad, Qazvin, Fasa, Rasht, Bukan, Marivan, and others, took to the streets to continue the nationwide uprising.

Many people were seen chanting anti-regime slogans directed specifically at the mullahs’ dictator, Ali Khamenei. The oppressive security forces of the regime were seen opening fire on peaceful gatherings of locals in various cities and areas of Tehran.

Locals in Karaj, west of Tehran, are commemorating the 40th anniversary of Hadith Najafi’s assassination by the regime’s oppressive security forces. According to reports, protesters set fire to a vehicle belonging to the security forces, forcing their units to flee the scene.

Similar gatherings took place in Fuladshahr, Qazvin, Rasht, Amol, and Chalus. On the 40th day since her murder by the regime’s security forces, a large crowd gathered in Fuladshahr to remember Mahsa Muguie.

Beginning Wednesday morning, students in numerous universities and high schools across the country were relentlessly pursued by the regime’s official security forces and plainclothes agents in their protest gatherings against the regime’s escalating crackdown.

Iranian opposition NCRI President-elect Maryam Rajavi praised the Iranian people for their ongoing anti-mullah rallies. “On Day 48 of Iran’s protests, students at Sistan and Baluchestan University chanted, ‘Freedom, equality, Kurd, Baluch, and Azeri,’ emphasizing the desire for democracy and equality for all ethnic groups in Iran, which can only be realized by toppling the clerical regime,” she said.

On Day 48 of #IranProtests, students at Sistan & Baluchestan University chanted, “Freedom, equality, Kurd, Baluch, & Azeri,” insisting on the desire for democracy & equality for all ethnic groups in #Iran, only realized by overthrowing the clerical regimepic.twitter.com/aeMgFe47Ou

“Despite shootings by repressive forces, freedom-loving people and youths marked the 40th day of martyrdom of Hannaneh Kia, the beloved daughter of the people of Nowshahr. They cried out, ‘Khamenei will be overthrown this year,’ and demanded justice for Iran’s slain children,” she added.