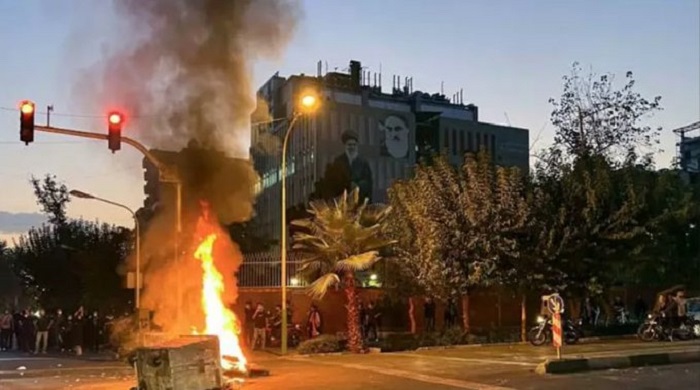 On Wednesday, the 111th day of Iran’s nationwide uprising, The MEK released the names of 614 protesters who were killed. The third anniversary of Qassem Soleimani’s death in a US drone attack just outside Baghdad International Airport was January 3.

Protesters and brave locals across Iran are expressing their hatred for Soleimani and the regime as a whole by targeting Soleimani’s posters, banners, placards, and billboards with Molotov cocktails and homemade explosives.

Qassem Fattollahi, a ranking IRGC member in Tehran and commander of an IRGC paramilitary Basij base in the Iranian capital, was gunned down and killed outside his home, according to a report that has shaken the regime’s security apparatus. Fattollahi was shot four times and died at the scene, according to the semi-official Tasnim news agency, which is affiliated with the IRGC Quds Force.

According to local activists, regime authorities have imposed martial law in the city of Semirom in Isfahan Province, central Iran. Internet connections are severely disrupted, and many people have been arrested at night, with footage becoming available online with at least a 24-hour delay.

Regime authorities have dispatched many security units to the city’s judiciary building and are installing security cameras in various areas in the restive city of Javanrud in Kermanshah Province. Officials are concerned about further local protests and are even planning attacks on various administrative buildings.

According to other reports, workers and employees of the Ilam Petrochemical Company went on strike, demanding answers to problems they have been raising with officials for some time. They held a rally outside the local governor’s office. Authorities flooded Zahedan’s Kowsar Street in Sistan & Baluchestan Province, southeast Iran, and arrested dozens of residents.

Iranian opposition President-elect Maryam Rajavi of the National Council of Resistance of Iran (NCRI), commented on the regime’s continued crackdown and oppressive measures against the restive city of Javanrud in Kermanshah Province, western Iran, which has recently seen major anti-regime protests.

Khamenei’s Intelligence Ministry and IRGC attacked people’s homes in #Javanrud, arresting the city’s youths to prevent the continuation & spread of #Iranprotests. Such cruelties only add to the Iranian people’s fury and motivation to topple the regime.#IranRevolution pic.twitter.com/FeH5wYDtg9

“Young people in Iran will not leave such arbitrary arrests and their perpetrators unanswered by their courageous uprisings. The United Nations and Member States need to take urgent action to compel the regime to stop executions, persecution, and torture in Iran. Silence tramples human rights,” she explained.