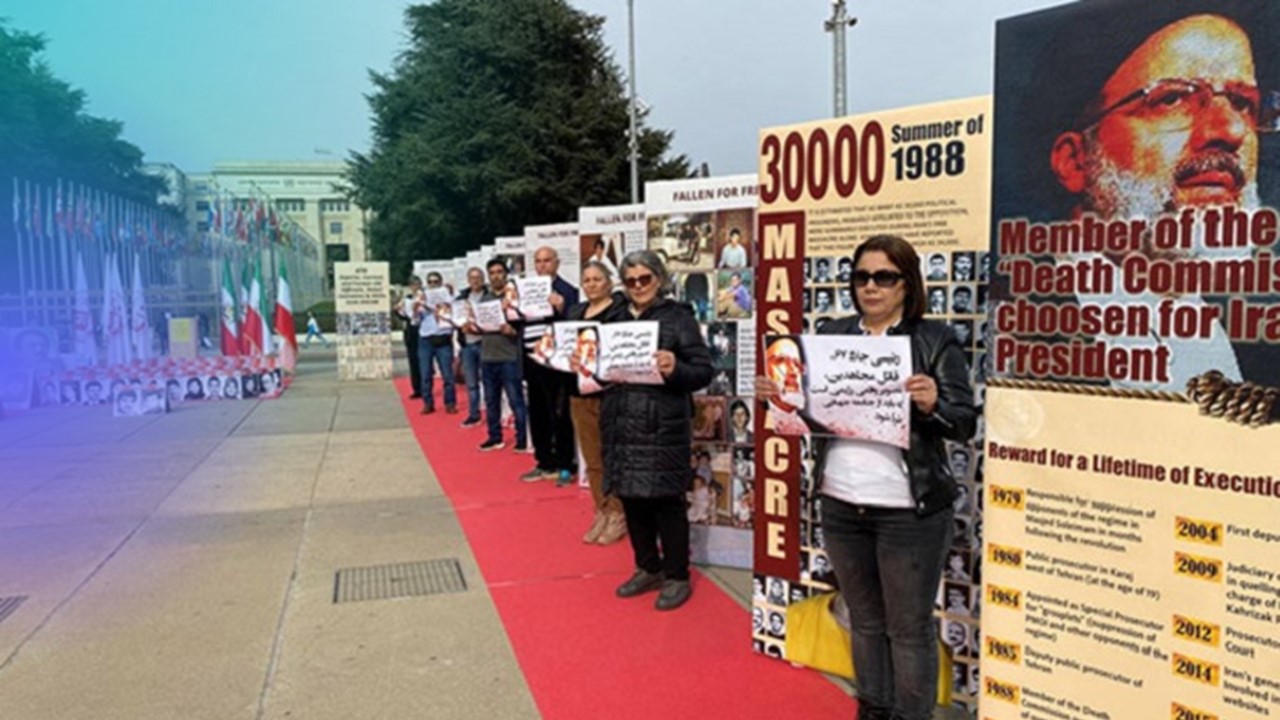 On Thursday, March 17, freedom-loving Iranians and supporters of the Iranian opposition People’s Mojahedin of Iran (PMOI/MEK)in Geneva held an exhibition outside the UN European Headquarters in Geneva, calling on the international body to hold the mullahs’ regime ruling Iran accountable for the massacre of over 30,000 political prisoners, the majority of whom were MEK members and supporters, in 1988.

This event and exhibition took place in conjunction with the UN Human Rights Council’s 49th annual session, which focused on the global human rights situation, including a yearly evaluation of Iran’s human rights situation. During the discussion, UN Special Rapporteur on the Situation of Human Rights in Iran, Javaid Rehman, expressed grave concern about the country’s persistent severe human rights violations and emphasized the need for accountability for crimes committed by regime authorities.

March 17 – Geneva
Freedom-loving Iranians and supporters of the #Iran opposition PMOI/MEK holding an exhibition in memory of 30,000 political prisoners executed by the mullahs' regime during the summer of 1988.#1988Massacre

Rehman claimed that the death sentence would be used more frequently in Iran in 2021, with at least 280 executions, including 10 women and two minors. According to Rehman, many of them executed belonged to the Baluch and Kurdish minorities.

“Death sentences were continued to be enforced for a wide range of offences, including against people who engaged in rallies,” Rehman said. Rehman advocated for the abolition of the death sentence in Iran, particularly for the execution of minors.

Rehman also encouraged the Council to play a more active role in holding Iran accountable for human rights violations, particularly the 1988 mass executions of political prisoners and the 2019 killings of Iranian demonstrators.

Iranian regime authorities have recently executed 14 detainees in various cities around the country.

Following Javaid Rehman’s report and remarks from a number of officials from a variety of nations condemning the regime’s human rights breaches, the Iranian regime’s envoy lashed out at the MEK at the UNHRC session on Thursday.

“The fact that the human rights mechanism on Iran has no guarantee and lacks a legal jurisdiction is not fair or justifiable. Delegates representing the US regime and its apartheid allies, as well as the regime hosting the most terrorist group, the MEK, are among those who supported the mandate,” he stated, indicating the main cause of the regime’s concerns about exposures of its human rights abuses to the world.

Kazem Gharib Abadi, the regime’s deputy for international affairs and secretary of the mullahs’ so-called “Human Rights Department,” met with Michelle Bachelet, the UN High Commissioner for Human Rights, earlier this month to express his displeasure with the MEK, their actions, and revelations that have proven costly to the mullahs’ regime.

“The Special Rapporteur has become a conduit for terrorist groups to disseminate misleading information.” In recent statements, Gharib Abadi stated that “this terrorist organisation is today free to go about and continue their actions against the [mullahs’ rule] in the very capitals of those countries that are supporting the resolution establishing a special rapporteur for Iran.”

Gharib Abadi is the deputy of Gholam-Hossein Mohseni-Ejei, the regime’s “judiciary.” Ejei has a history of violence, assassination, and persecution of dissidents. Ejei has been blacklisted by the U.S. and European Union for his human rights violations.