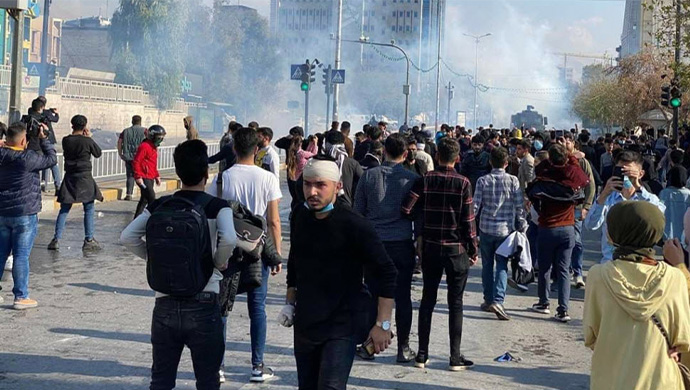 Sunday marked the 38th day of Iran’s nationwide uprising sparked by Mahsa Amini’s death. The 22-year-old woman from the Kurdistan Province city of Saqqez was brutally beaten by morality police and died of her injuries in a Tehran hospital on September 16.

Protests in Iran have now spread to at least 197 cities. According to sources from the Iranian opposition People’s Mojahedin of Iran (PMOI/MEK), the regime’s forces have killed over 400 people and arrested over 20,000. The MEK has released so far, the names of 241 protesters who were killed.

Teachers went on strike in several Kurdish cities on Sunday, including Saqqez, Marivan, and Kamyaran. Students also protested in several cities across Iran. At Yazd University, the students were chanting “Students will die but won’t give in to disgrace!” In Kermanshah, the students of Razi University encouraged other students to join the protests by chanting, “Proud college students! Support! Support!” In Khomeini Shahr and Gohardasht, the students of Islamic Azad University held protest rallies.

October 23 – #Iran
Local teachers in the cities of Marivan and Kamyaran are on strike in solidarity with the nationwide protests against the regime on the 38th day of the uprising.#IranRevolution2022#آزادی_آزادی_آزادی pic.twitter.com/ioCGzdP9Qm

During the day on Saturday, college students and other minors took to the streets, and there were reports of a continuous general strike in several Kurdish cities in western and northwest Iran, as well as merchants in Gohardasht, Alborz Province, just west of Tehran.

October 23 – Yazd, central #Iran
Yazd University students continuing the nationwide protests against the regime on the 38th day of the uprising.#IranRevolution2022#آزادی_آزادی_آزادیpic.twitter.com/fnTOqlApgo

Protests were fierce in Tabriz. Protesters set fire to roads to prevent security forces from moving. Security forces attacked and brutally beat protesters in several parts of Mashhad. Residents, however, continued to hold protest rallies. Protesters in Shahin Shahr chanted, “This is the year [Khamenei] will be deposed!”

Members of the Iranian Diaspora marched in Berlin in support of their Iranian compatriots and the ongoing uprising against the mullahs’ regime. Over 80,000 people took part in Saturday’s massive rally, chanting “Death to Khamenei!” “Death to the dictator!” and “Death to the oppressor!” were among the slogans used in solidarity with the Iranian people. Similar rallies were held in other cities around the world, including Washington, Los Angeles, Toronto, and Stockholm, among others.

Iranian opposition NCRI President-elect Maryam Rajavi praised the Iranian people for their ongoing anti-regime uprising and the Berlin demonstration in their support. “On the 37th day of Iran protests, all sectors of Iranian society rose up, including university and high school students, workers, and bazaar merchants, filling the Iranian political scene in Iran and abroad with cries of ‘Death to Khamenei.'” “The Iranian people have once again demonstrated their desire to overthrow the mullahs’ regime and establish a democratic republic,” she emphasized.

On the 37th day of #Iranprotests, all sectors of Iranian society, including university and high school students, workers, and bazaar merchants rose up and filled the Iranian political scene in #Iran and abroad with cries of “Death to Khamenei.” pic.twitter.com/fnwRfb04dL

“From Tehran to Zahedan, Isfahan, Mashhad, Sanandaj, Ahvaz, and other cities, all sectors and ethnic groups, women, and men are united… Their unity has defeated Khamenei’s and his ruthless IRGC’s repressive measures to put an end to the uprising,” Mrs. Rajavi emphasized.

“Despite its daily crimes, the ruling regime has reached its limit.” “Now is the time for Iran’s freedom movement to rise from the ashes of suppression,” concluded the NCRI President-elect.