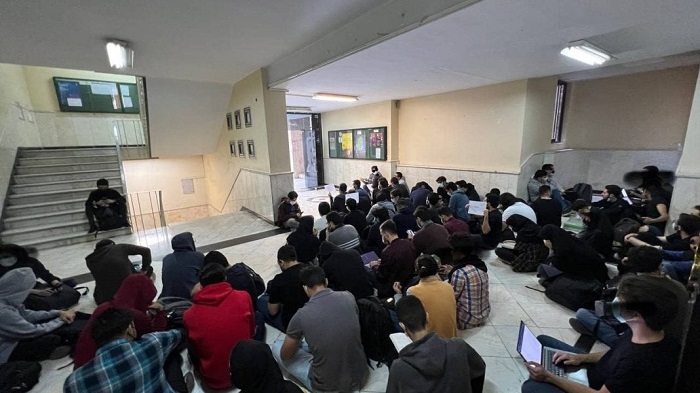 On Monday, October 31, the 46th day of the nationwide uprising, students from dozens of universities across the nation held sit-ins and protests despite brutal repression by the IRGC forces in recent days.

“Today, braver than ever, with knowledge and truth, we have come to fight your ignorance and lies, to say that we will not sell the blood of our brothers and sisters to your constant threats and coercion,” Soureh University students stated in a statement against the widespread crackdown on students. “We condemn all forms of repression and violence against students, and we raise our voice for liberty louder than ever.”

October 31 – Arak, central #Iran
Students of Arak University chanting:
"Be afraid! We're all together!" towards the regime's security forces.#IranRevolution#آزادی_آزادی_آزادی pic.twitter.com/wM2JlDRFv9

Mrs. Maryam Rajavi, President-elect of the National Council of Resistance of Iran (NCRI) stated that “the uprising of courageous students in universities across Iran demonstrated that the children of Iran are not intimidated by IRGC atrocities and are willing to pay the price of freedom as much as necessary.” She went on to say that “unity and stability ensure progress toward freedom.”

On the 45th night of the uprising, Sunday, October 30, rebellious youths in Sanandaj set fire to an IRGC observation center in Asuleh town and a Basij base in Baw Hariz. They shut down the road in Saadi town and clashed with regime agents in Baharan Villashahr, Sanandaj.

In Mashhad, youths threw incendiary materials at seminary number 15 in the Hamza district. People protested the arrest of girls in Qahdarijan, Isfahan, and held a protest rally at night, carrying a large placard warning repressive forces that the people would not remain silent in the face of the imprisonment of girls and women.

Despite crackdown & threats univ. & high school students in Tehran, Sanandaj, Mashhad, Qazvin, Yazd, Isfahan, Tabriz & elsewhere came to the scene with chants of “death to the dictator,” “Freedom,” “Imprisoned students must be freed.” This hurricane will continue until victory. pic.twitter.com/9paNwpOEK5

Bukan youth gathered in the street, lighting fires and chanting “death to the dictator.” Youths hurled Molotov cocktails at the police station 11 in Torbat Heydarieh. Rebellious youths in Bandar Abbas blocked the road by lighting a fire.

On Sunday night, Sanandaj intelligence agents intended to detain female students in the Fereshtagan dorm, but professors showed up to defend the students and stopped the detainment.

The lives of those injured in the attack on worshipers in Zahedan on Friday, October 29, are in danger. Doctors are not permitted to treat them, and many injured people in their homes are unable to receive treatment due to the risk of arrest.

October 31 – Tabriz, northwest #Iran
Students of the Tabriz University of Medical Sciences are continuing the nationwide protests against the regime on the 46th day of the uprising.#IranRevolution2022#آزادی_آزادی_آزادی pic.twitter.com/APTbwauRe5

On October 30, the State-run Jahan News agency reported that police officer Mohsen Rezaei was killed and three others were injured in a clash with civilians in Iranshahr. Hamzeh Alinejad of the Gilan province Basij force was also killed in a clash with youths.