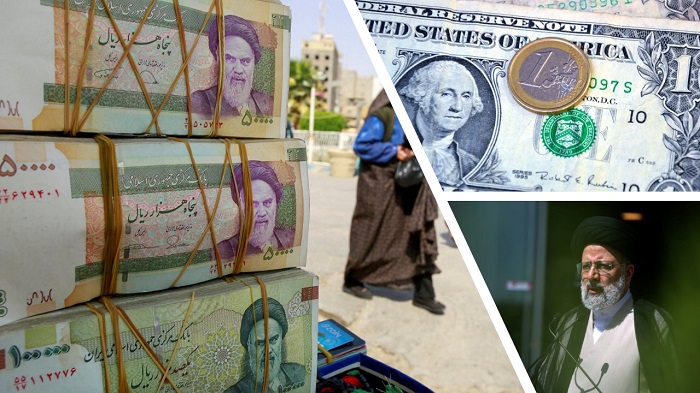 State media, on the other hand, are reporting that the claims made by Raisi and members of the cabinet are false and that not only has the country’s economy and people’s livelihood not improved, but that inflation and commodity prices have risen, citing the Regime Statistics Center and official government figures.

“As of early November, the increase in food and beverage prices in the country during the 12 months leading up to October this year compared to the same period last year (annual inflation) was 61.4 percent, a new high for food inflation.” This inflation, as well as this statistic, is known as ‘hyperinflation,’ as it has exceeded the bounds of regular inflation. According to a November 14 report by the state-run Etemad daily, “the US dollar exceeding the 280,000 rial threshold sounds an alarm that must be heard.”

“Inflation in October was reported to be 45.4 percent, according to data from Iran’s Statistic Center. On paper, these figures demonstrate tremendous inflation, but the most terrifying aspect of this phenomena is felt in the daily lives of millions of people, particularly in major cities. According to a November 16 report by the state-run Mostaghel daily, “very high food and supply costs, astronomical rent rates, travel costs, skyrocketing health care costs… all are imposing enormous pressure on the middle class.”

Iranians getting poorer after Raisi’s first 100 days in office

The economic road ahead for the mullahs’ regime will lead to a dead-end and escalating social tensions that bear dangerous potentials for the regime’s future.#Iran #Povertyhttps://t.co/ygqsZFmFHT

The economic situation is so bad that the government is compelled to admit, even though its own official figures, that conditions are now “beyond the crisis.”

“One of the Raisi cabinet’s commitments was to address the economic difficulties of our society’s most vulnerable groups right away. The daily increase in costs during their first 100 days in power, on the other hand, shows no apparent signs of improving the impoverished people’s living conditions. According to a November 14 report published by the state-run Etemad newspaper, “prices are skyrocketing across the board now that the preferential exchange rate is to be eliminated, and even if direct subsidies increase, the poor people are still considered to be extremely vulnerable.”

The current situation reveals that many segments of Iran’s society have crossed the line of absolute poverty and have reached the “survival” line, desperately striving to stay alive.

Even government specialists agree that the basis of the problem is institutionalized and structural corruption. As a result, regardless of amount or quality, every economic project and plan in Iran becomes a source of rent and looting for government officials.

According to Mohsen Zanganeh, a member of the regime’s Majlis, “up to $55 billion in a currency based on the preferential exchange rate ($1 = 42,000 rials) has been distributed across the country,” but the effect was not a price drop, and as a result, “many cases of rent and economic corruption” (parliament).

“Up to $8 billion in goods have been supplied using the preferential exchange rate. According to a November 6 report by the state-run Eghtesad Online website, “the cabinet of [former regime president Hassan Rouhani] and [the Raisi cabinet] have used a total of $8 billion to supply seven items of goods based on the preferential exchange rate since the beginning of 2021,” Zanganeh added.

Prices in Iran would not have escalated if this money had been spent on buying basic items for the people and dispersed in the market based on the 42,000 rials per dollar exchange rate.

As a result, the mullahs’ regime’s economic path will lead to a deadlock and growing social conflicts, both of which have severe implications for the regime’s future.