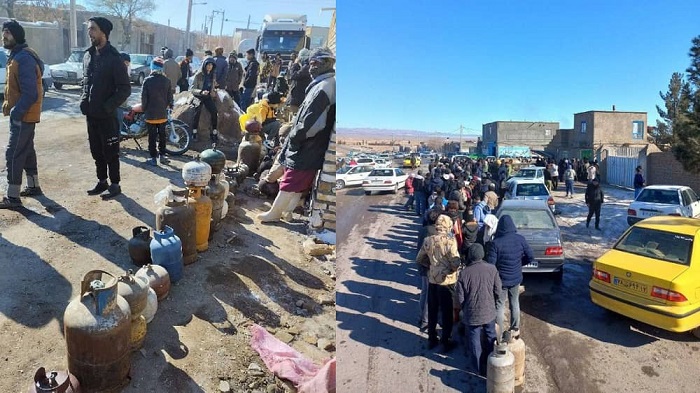 But how can a country with the world’s second-largest natural gas reserves face such a crisis? Due to the recent closures caused by the gas crisis, many people’s basic needs have become scarce. Many bakeries, for example, are closed or only bake bread once or twice a day. As a result, in addition to enduring cold nights, many Iranians must queue in freezing temperatures for a loaf of bread.

The ruling theocracy, as usual, blames people and their “high usage” for the current gas crisis. Authorities openly advise people to wear more warm clothing, turn off heating devices for at least six hours per day, keep the temperature in the home below 18 degrees Celsius, and only use heaters in one room.

The angry people of Torbat-e Jam and Taybad attacked the Governor’s Office and other government centers to protest lack of gas and heating resources. #IranProtests pic.twitter.com/WWXAbIYJA3

The ruling kleptocracy has also taken advantage of this opportunity to further plunder people’s wealth by raising gas prices by 30 to 50 percent for so-called “high-usage households.” In other words, the regime tells people who don’t have proper heating devices or other necessities in the winter to shiver and bear the bitter cold, or they will be charged.

This amount is insignificant in comparison to the country’s gas consumption, which ranges between 600 and 700 million cubic meters per day. Furthermore, it is an embarrassment for a government that claims it can cripple the economies of European countries by seizing gas exports to them.

In 2021, Hassan Rouhani’s Minister of Oil, Bijan Namdar Zangeneh, warned of a gas shortage crisis in Iran, admitting that “if we fail to attract foreign investors, we will face serious problems.”

However, considering the foreign investment in Iran’s gas sector is an impossibility. Because this investment is expensive, some estimate that it will cost billions of dollars. The regime’s corruption and oppression, above all, have resulted in massive capital flight.

Tehran’s international isolation as a result of its terrorism and warmongering policies leaves no room for potential foreign investment. It is worth noting that, similar to gas, the majority of electricity produced in Iran was transferred to Iraq, leaving very little for Iranians in the midst of a hot summer and the Covid-19 crisis.