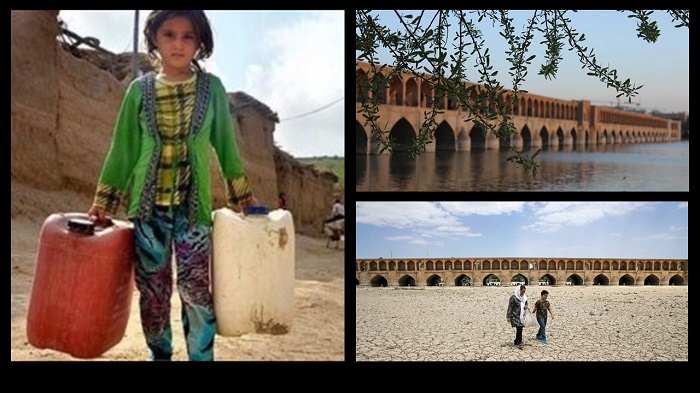 On the eve of International Water Day, which is titled ‘Groundwater – Making the Invisible Visible,’ many environmental experts predict that the country’s groundwater conditions will deliver a bitter, fragile, and tragic future if current trends continue.

Iran would have a cumulative tank shortfall of 140 billion cubic meters by March 2022. The term “cumulative tank deficit” simply signifies that the country has extracted more water than has reached subsurface aquifers. There is now a massive and huge debt owed to these aquifers.

Notably, the Iranian government’s mishandling and profiteering policies add approximately five billion cubic meters of water to this debt each year. Despite huge rainfalls and floods, such as in April 2019, this addition has not stopped.

Furthermore, 400 plains have been designated as ‘prohibited’ throughout Iran. ‘Prohibited’ clarifies various areas of the country where rainfall is no longer sufficient to replenish subsurface aquifers.

#WorldWaterDay#Iran faces a hidden truth that would have a disastrous impact as the #pandemic winds down.

Many environmental experts believe that #groundwater conditions, with this current trend, will bring a catastrophic future to the country. https://t.co/5j6lJmxX9u

Indeed, digging new wells and drawing water from existing wells is restricted in these areas. The threat, however, never was taken seriously by either state beneficiaries or environmental campaigners.

In Iran, there are around 600 plains. If we exclude the plains in the centre deserts or areas that people have abandoned owing to a lack of agricultural and industrial profit, almost the entire country is considered ‘prohibited.’

Nonetheless, the government refuses to prohibit enterprises and beneficiaries from digging new wells and harvesting additional water, resulting in a 50-centimetre drop in aquifer water level per year. This figure is substantially greater in densely populated areas including as Tehran, Isfahan, Shiraz, Mashhad, Tabriz, and Hamedan.

Mismanagement by the government in recent years has reduced the quantity of aquifers, which supply more than 55 percent of the country’s drinkable, agricultural, and industrial needs, as well as their quality. Worse, there is no indication of a basic approach to resolving this national issue.

Unsurprisingly, the regime has only dedicated four percent of the country’s water budget. This figure indicates that decision-makers have been completely unaware of the significance of groundwater’s impact on the country’s fate.

The Iranian regime’s destructive policies have devastated the country’s natural resources, placing their future in jeopardy over its four-decade control. As the International Water Association’s annual motto says, “groundwater is invisible, but its impact is visible everywhere.” The people of Iran are suffering the hazardous effects of groundwater scarcity, such as subsidence, all over the country.

This is just another heinous result of a theocratic state that enriches itself by exploiting natural resources. Iranians, on the other hand, have firmly proved their desire to rescue their country, future, and environment at whatever cost, as evidenced by constant protests by people from all walks of life, particularly farmers.