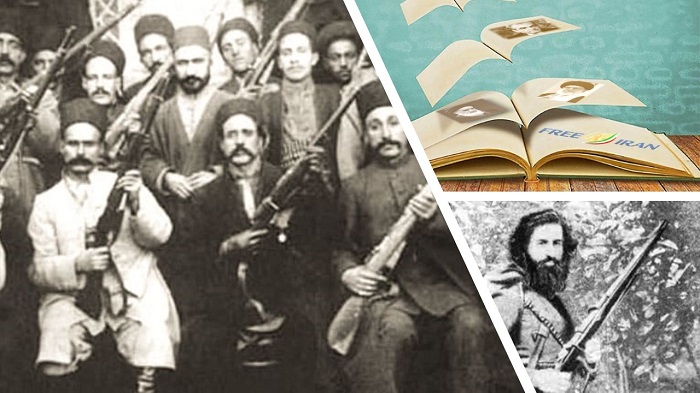 Two competing versions of Iran’s history have evolved since the mullahs took power in the country. One was propagated by the dictatorship and its propaganda apparatus, while the other was an unauthorized version that was generally accepted by the public.

The first, promoted by the mullahs, portrays them as true saviors of the country who opposed the Shah’s dark regime. They liberated the people, established a pious religion, and brought the country to ‘independence’ without the assistance of anyone other than divine intervention.

They exterminated any considered enemies of the people, from ordinary critics to “hypocrites” and atheists. Through the “Supreme Leader” or Velayat-e Faqih, they constructed a heavenly Islamic State.

Iran’s true heroes and heroines have no place in this version of history. If we come across the name of someone like Sattar Khan, one of the leaders of Iran’s 1906 Constitutional Revolution, it’s because the regime’s historians were unable to completely erase his legacy. However, they continue to minimize his participation, portraying him as a lowly foot soldier guided by clerics in Najaf who carried out the commands of Iran’s religious leaders.

In this version of history, Mirza Kuchak Khan, the head of the Nehzat-e Jangal Movement, is depicted as a staunch supporter of the mullahs’ views. Instead of Dr. Mohammad Mosaddeq, Mullah Mohammad Kashani, one of Iran’s most malevolent political personalities responsible for numerous tragedies, becomes the hero of the Iranian oil industry’s nationalization.

Dr. Mosaddeq is denounced as a freemason who only succeeded because of mullah Kashani’s help. After betraying Kashani’s friendship, he faced the wrath of God, the people, and the colonialists, and was eventually overthrown.

Ruhollah Khomeini, the founder of the Islamic Republic, is hailed as the solitary savior of the people from Iran’s 2,500-year-old monarchy in this skewed interpretation of history.

All of Iran’s true heroes have been reduced to hated positions as separatists, the Soviet Union, and British mercenaries, or as plain thugs who have derailed Iran’s true historical path. When it comes to Iran’s past, it’s unsurprising that the deposed monarchy and the reviled theocracy share comparable ideological slants and sensationalist propaganda. They want it to be rewritten in their own image.

There is no other movement or opposition left in their histories after the theocratic-colonialist revolution of August 15, 1953, and what is left is a collection of “terrorists,” Moscow stooges, or “Marxist-Islamists,” as the Shah put it. They all deserved to die in his eyes, and if they were apprehended, they should be treated as national security threats rather than political detainees.

Similarly, the mullahs claimed after the 1953 coup that they were the sole source of opposition. And if the masses saw any movement or resistance from groups like the People’s Mojahedin of Iran (PMOI / MEK Iran), or the Organization of Iranian People’s Fedai Guerrillas (OIPFG), it was only a few deviant movements whose momentum was disrupted by the mullahs’ steadfastness.

These are the lies and deceptions spread by the mullahs’ intelligence apparatus and the vestiges of the Shah’s monarchy. These lies are disseminated via the internet and social media, along with their own brand of historical revisionism, in order to deceive, particularly those born after the 1979 anti-monarchical revolution who lack an objective understanding of the Shah’s tyranny.

The mullahs’ entire monopoly on the free flow of information, as well as the mullahs’ harsh censoring of facts, has harmed these younger generations. They have mostly had access to ambiguous or distorted sources whose objective is to mislead the public into believing that theocracy or monarchy is the only options in Iran’s political universe; there is nothing else.