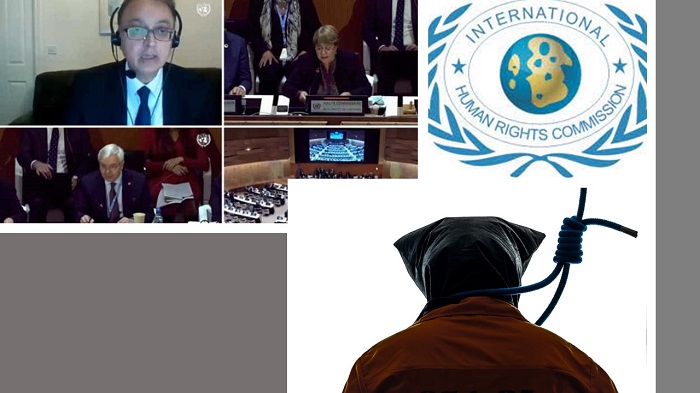 On March 17, during the 49th session of the Human Rights Council in Geneva, UN Special Rapporteur on the Situation of Human Rights in Iran, Javaid Rehman, presented his report, which listed numerous cases of terrible human rights violations in Iran and called for an independent investigation into the 1988 massacre of political prisoners and the crackdown on the November 2019 uprising, as well as an end to systemic impunity.

Special Rapporteur Javaid Rehman made an appeal to the UN Member States to seek accountability for the 1988 massacre while presenting his latest report (A/HRC/49/75) before the annual UN Human Rights Council session on Iran.

“71. The Special Rapporteur urges the international community to demand responsibility for long-standing emblematic events, such as the enforced disappearances and summary and arbitrary killings of 1988 and the November 2019 protests, which have been met with sustained impunity.”

Following the presentation of the report, a number of UN Member States supported the call for accountability for the massacre in 1988.

“The number of executions increased last year,” the UN Special Rapporteur noted. “Many of those executed were from ethnic minorities, including 40 Baluchis and more than 50 Kurds. The death penalty is regularly used, including for people who participate in demonstrations. There is no right to a lawyer in judicial proceedings, and forced confessions are obtained by torture.

“My report to the Human Rights Council emphasizes the use of fatal force against rallies,” Javaid Rehman continued. Water scarcity and basic livelihood constraints were the catalysts for the two rallies. Iran has disrupted the Internet in both incidents, preventing prompt access and sharing of information. Despite substantial resistance from civil society, the Iranian parliament enacted a bill addressing online services in February. The measure is a significant step toward erecting a digital wall in Iran, effectively cutting the country off from the rest of the world’s Internet.”

“The structure of administration and the lack of an accountability system in Iran have fostered a culture of impunity that perpetuates cycles of violence, as human rights crimes have no consequences for the government or the offenders,” Javid Rahman said in his report to the Human Rights Council. “It appears that the state has a policy of intimidating, prosecuting, or silencing those who call for accountability, justice, and truth. The imprisonment of Maryam Akbari Monfared for seeking truth and justice for her relatives who were forcibly disappeared and executed in 1988 is a glaring illustration of this.”

“There are also threats and harassment from persons seeking legal action for the loss of family members as a result of the downing of the Ukrainian plane,” Javaid Rehman remarked. Or attacks and arrests of family members seeking justice and information on the whereabouts of their children who were slain or imprisoned during the November 2019 protests.”

The UN Special Rapporteur on Enforced Disappearances and Arbitrary Field Executions in 1988, as well as the killings that occurred during and after the November 2019 uprising, urged the international community to hold the Iranian regime accountable for incidents of permanent impunity.