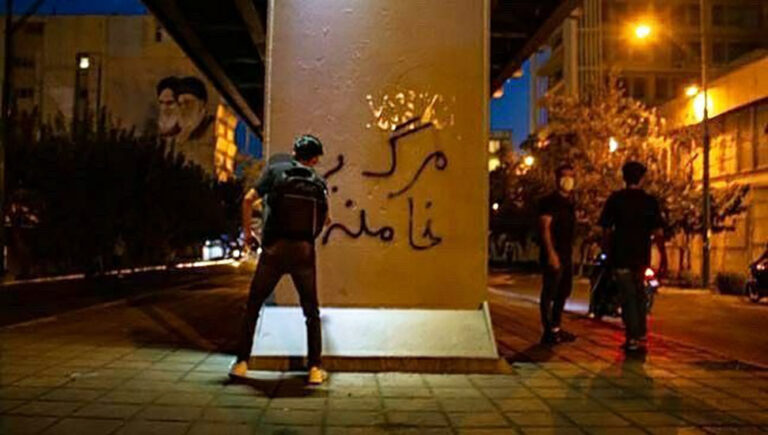 Brave men and women, as well as many teenagers, took to the streets in anti-regime protests, chanting slogans such as “Death to Khamenei!” “The Basij/IRGC must perish!” “We’re going to overthrow [the mullahs’ regime] with or without the hijab!”

Concurrent with these rallies, truck drivers across the country and across various industrial sectors are on strike, dealing a significant blow to the mullahs’ control of the country’s economy.

Protests in Iran have now spread to at least 279 cities. According to sources from the Iranian opposition People’s Mojahedin of Iran (PMOI/MEK), the regime’s forces have killed over 680 people and arrested over 30,000. The MEK has released the names of 555 protesters who were killed.

In Abdanan, families of detained protesters held a protest rally in front of one of the regime’s courthouses on Saturday, demanding the release of their loved ones. In recent weeks, the regime has resorted to harsh sentences for protesters detained during the nationwide uprisings.

December 3 – Tehran, #Iran
Workers at the IRGC-linked Crouse Company are on strike. This is the country's largest auto parts manufacturing company.#IranRevolution2022#اعتصابات_سراسری pic.twitter.com/MZ4ueeHYk1

On December 7, the country’s Student Day, protesters are calling for a three-day nationwide campaign of intensified rallies. The increase in anti-regime protests is set to begin on December 5 and aims to deal another blow to the mullahs’ regime as a whole.

Iranian opposition President-elect Maryam Rajavi of the National Council of Resistance of Iran (NCRI), praised Iran’s Baluchi community for once again protesting the mullahs’ rule, expressing solidarity with their compatriots, and defying the regime’s oppressive security forces on the streets.

“Our Baluch compatriots rose again today in step with the nationwide movement to seek justice for those who laid down their lives for the freedom of Iran. In Zahedan, Zahak, Chabahar, and Iranshahr, they chanted, ‘Death to Khamenei!’ ‘Death to IRGC!’ ‘Kurds and Baluch are brothers!’” she said on Friday.

Our Baluch compatriots rose again today in step with the nationwide movement to seek justice for those who laid down their lives for the freedom of #Iran. In Zahedan, Zahak, Chabahar, &Iranshahr, they chanted, “Death to Khamenei,” “Death to IRGC,” “Kurds and Baluch are brothers.” pic.twitter.com/WFKJrTpp4L

“Today, brave Baluch women emphasized women’s leadership in the battle against the ruling mullahs. In Zahedan, they chanted, ‘With hijab or without hijab, onward for a revolution.’ Women and youths will bring the ultimate destruction of the mullahs’ misogynist dictatorship,” the NCRI President-elect emphasized.