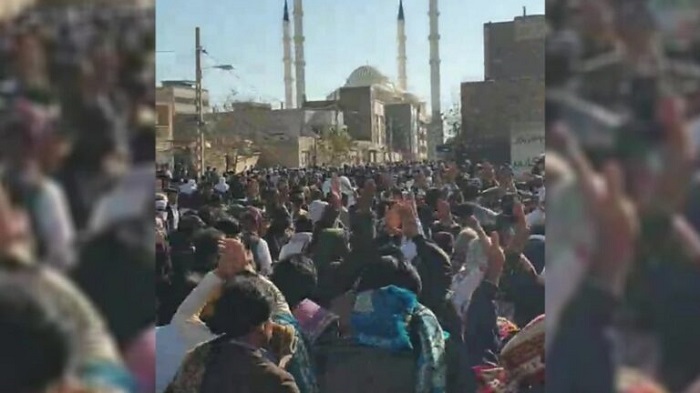 Following a day of major rallies and demonstrations against the mullahs’ regime in various cities of Sistan & Baluchestan Province, Iran’s nationwide uprising enters its fifth month. On Friday, a large number of locals took to the streets in the cities of Zahedan, Rask, and Khash, chanting slogans aimed squarely at the regime’s vast crackdown apparatus.

On Saturday morning, approximately 500 relatives of inmates held in the regime’s prison protested the conditions of their jailed loved ones outside the mullahs’ so-called judiciary building. These family members had traveled to Tehran from various distant cities. Some children were seen carrying placards with the words “Don’t execute my father!”

Authorities sent security forces to disperse the crowd in this gathering under the false premise that the judiciary was closed today.

Locals in Mallard, a town in Tehran Province, set fire to Khamenei’s local representative’s office. More such attacks are reported in cities, towns, and villages across the country every day, indicating the Iranian people’s growing hostility toward the mullahs’ regime.

On Friday night, protesters were seen holding a rally in Sarableh, a city in Ilam Province in western Iran, and chanting, “We vow on the blood of our fallen compatriots that we will stand to the end!”

In Zahedan, courageous protesters marched in a large demonstration, chanting “Basij and IRGC, you are our enemies!” “Death to Khamenei!”

January 13 – Sarableh, Ilam Province, western #Iran
Protesters were chanting: "We vow on the blood of our fallen compatriots that we will stand to the end!"#IranRevolution2023 #FreeIran2023 pic.twitter.com/sDUSkHA5Af

Iranian opposition President-elect Maryam Rajavi of the National Council of Resistance of Iran (NCRI) praised the Iranian people’s brave uprising against the mullahs’ regime and emphasized their determination to destabilize theocratic dictatorship and its entire apparatus.

“Our Baluch compatriots once again took to the streets of Zahedan, denouncing the principle of Velayat-e Faqih, rejecting both the monarchic and religious dictatorships. They emphasized the Iranian people’s desire for people’s sovereignty and the overthrow of the regime,” the NCRI President-elect said.