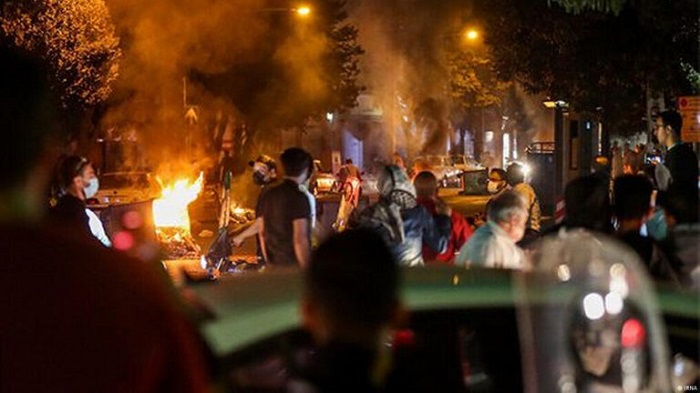 On Tuesday, Iran’s nationwide uprising marked its 117th day, with protests continuing in various forms as people continue to take to the streets, holding gatherings in various ceremonies and turning them into anti-regime rallies, and continuing attacks on the regime’s sites and symbols.

According to social media reports, regime authorities moved Mohammad Ghobadlou and Mohammad Broghani to solitary confinement in Karaj’s Gohardasht Prison on Sunday night local time in preparation for their execution. Ghobadlou and Broghani were sentenced to death after being tortured into coerced confessions and without due process under regime laws.

Parents and others gathered outside the prison in Karaj to protest and prevent the two young men from being executed. In their rally, the protesters began chanting anti-regime slogans such as “I will kill those who killed my brother!” and “This is the last message: another execution and more uprisings!”

Official and contract workers of the Mobin Petrochemical Company in the city of Asaluyeh, Bushehr Province in southern Iran, went on strike today, demanding answers to long-unresolved issues.

Defrauded Ramak Khodro auto company investors held a rally and began protesting in Tehran, demanding their stolen investments be returned. In other news from the capital, students at Allameh Tabataba’i University protested the strict security measures imposed on their campus today.

On Monday, people gathered in the town of Eshtehard in Alborz Province, west of Tehran, to remember Mohammad Mehdi Karami and Seyed Mohammad Hosseini, who was executed on Saturday by the mullahs’ regime for participating in recent protests. Authorities have deployed security units to the area to prevent any such gathering from turning into an anti-regime protest rally.

Locals in the northwest Iranian city of Bukan gathered on Monday to commemorate the 40th anniversary of Avat Ghaderpour’s murder by regime security forces during the recent protests. The crowd began chanting, “Death to the oppressor! Whether it’s the Shah or [Khamenei]!”

January 9 – Bukan, northwest #Iran
Locals gathered to mark the 40th day of Avat Ghaderpour's murder by regime security forces began chanting: "Death to the oppressor! Be it the Shah or [Khamenei]!"#IranRevolution2023pic.twitter.com/Zay57a1epD

Iranian opposition President-elect Maryam Rajavi of the National Council of Resistance of Iran (NCRI) has emphasized once again that the international community must take effective and practical measures against the regime’s killing sprees, torture, and executions.

“May governments and international institutions respond immediately to the desire of the Iranian people who are subjected to suppression, torture, and execution,” she emphasized.

May governments and international institutions respond without delay to the desire of the people of #Iran who are enduring suppression, torture, and execution.#StopExecutionsInIran pic.twitter.com/fI5scRxbcK