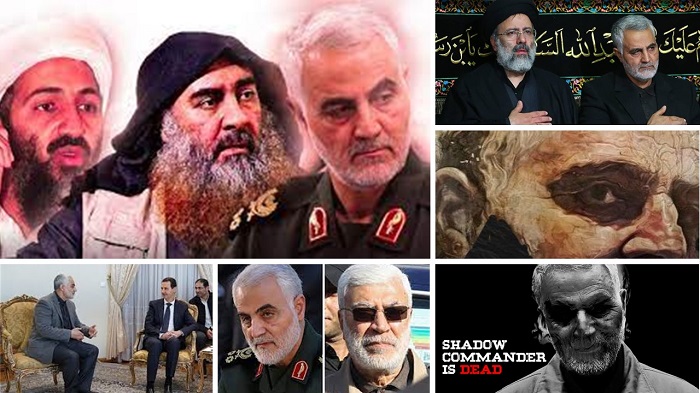 On January 3, it was the second anniversary of the drone strike that killed Qassem Soleimani, the Iranian regime’s senior terrorist operative. The regime has been displaying an outpouring of belligerence in honour of the anniversary. Former US President Donald Trump should be tried for ordering the strike at the start of 2020, according to the installed President Ebrahim Raisi, who also threatened “without a doubt” that the followers of Supreme Leader Ali Khamenei would take revenge on US officials anywhere in the world if no trial was forthcoming.

The regime has exhibited a storm of militancy

Iranian authorities also announced that 127 persons had been named as “suspects” in Soleimani’s assassination. Raisi’s threat was a broad warning about the possibility of Iranian-backed terrorist attacks and murder attempts against Americans and US allies. A series of drone and rocket attacks against US soldiers in Iraq and Syria, as well as the capture of a ship belonging to one of America’s Arab friends, quickly ratcheted up the threat. In an ironic twist, the Iranian dictatorship issued “sanctions” on more than 50 Americans on Saturday in response to Soleimani’s assassination.

In response to the government’s threats, White House National Security Advisor Jake Sullivan said there would be “severe consequences” for Tehran if any US nationals were harmed by the Iranian regime or its affiliates. However, it is unclear whether the Biden White House is willing to follow through on such threats, and thus whether Tehran can be expected to take them seriously.

Tehran’s actions do not help the ongoing Vienna talks

Whatever Tehran’s aims are, its actions are not assisting the ongoing Vienna talks. The goal of these talks is to revive the Joint Comprehensive Plan of Action or JCPOA. However, the Iranian dictatorship has also been employing different rhetoric. The Iranian negotiating side occasionally expresses optimism about the progress of the talks, either directly or through Russian counterparts.

Hossein Amir-Abdollahian, the Iranian regime’s Foreign Minister, traveled to Muscat on January 10 to meet with Omani officials. Although it was said that the visit was intended to improve Iran-Oman relations, some speculate that the timing and unusual two-day visit were just intended to signify Tehran’s desire to relive the nostalgia of the 2013 secret meetings with American officials.

In order to achieve this, Iranian officials have modified their public pronouncements in recent days, but without actually signalling a shift in the regime’s negotiation stance. On Monday, Saeed Khatibzadeh, a spokesman for the regime’s Foreign Ministry, said the negotiations had moved on “all four problems,” including “nuclear matters.” The other three, on the other hand, were all related to sanctions relief. As a result, Tehran has given rise to rumours that it is negotiating its own return to JCPOA compliance, although it is still emphasizing that sanctions relief takes first.

The Islamists in Tehran have so far steadfastly opposed all offers that could lead to mutual reimplementation of the 2015 nuclear accord. And since Raisi’s election as president in June, his regime’s stance in the Vienna talks appears to have hardened even more. While the foreign powers are baffled by the regime’s political manoeuvrings, the clerics in Tehran disagree. The mullahs have impunity on multiple fronts, both locally and internationally, as long as the negotiations continue.

The West has demonstrated over the previous two decades that it will not irritate Tehran by taking meaningful action against its human rights violations in order to “keep the discussions” for the benefit of “global peace.” But, in practice, neither world peace nor the negotiations yielded results. It’s past time for the West to rethink its concept of pragmatism and see the advantages of choosing values over hollow illusions, which are translated as “diplomatic interests” in the West by Tehran’s mouthpieces.