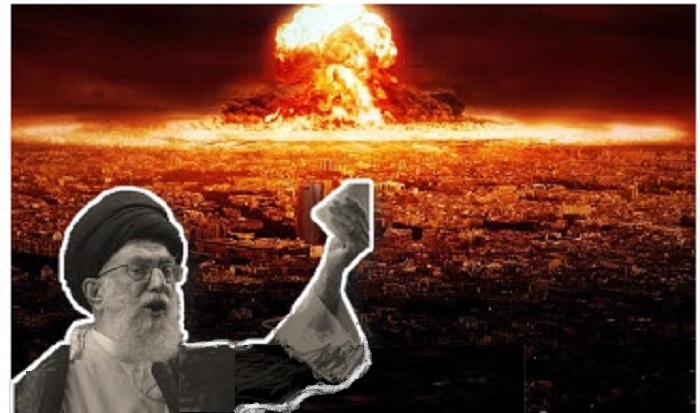 The supreme leader of the Iranian regime, Ali Khamenei, issued a fatwa many years ago, declaring that the development of any kind of nuclear weapon is haram [forbidden in the Muslim faith]. This fatwa is clearly inconsistent with the regime’s actions in recent years, particularly when it comes to its nuclear activities.

Many people have mocked this contradiction, with some comparing it to the regime’s founder, Ruhollah Khomeini, making claims in Paris about offering all kinds of freedom to the Iranian people from his special villa in Neauphle-le-Château.

Khomeini said, “The first thing for human beings is freedom of expression…we want a government that does not kill someone because they which the death of someone.” “Women are free in the Islamic government,” he added, referring to women’s rights. Their rights are the same as men’s.”

Khomeini began to repress and torture women once he gained power in Iran, even for a visible strand of hair. His Hezbollah forces began hunting women under the slogan “headscarf or punishment,” knowing full well that women would be the first to stand in the way of his medieval and religious fascism.

His priority was to kill freedom in the political climate of the time, not to fulfill the promise of housing for the homeless. He regretted not erecting gallows in the squares from the beginning, as well as not breaking pens and shutting the mouths of intellectuals and revolutionaries. This was the only time Khomeini publicly chastised himself.

The regime considers the development of an atomic bomb to be a top priority because it is their “guarantor of survival.” They are convinced that they will be able to survive the nuclear bomb’s unavoidable demise.

Ali Motahari’s naive admission about the regime’s decision to build a bomb from the start of its nuclear activities is just one of many examples of secret conversations in the inner circle of power that reveal the regime’s true evil intentions. He said something at the wrong time and in the wrong place that should have remained a secret for the rest of his life.

“From the beginning, when we entered nuclear activity, our goal was to build a bomb and strengthen deterrent forces,” he said, “but we were unable to keep the issue secret, and the secret reports were revealed by the MEK [People’s Mojahedin of Iran (PMOI/MEK)].”

Some regime officials expressed their displeasure with this reality by issuing threats and warnings. “That means you have the power to increase your enrichment to 99 percent in a short time,” Mahmoud Reza Agha Miri, President of the regime’s University of Nuclear Engineering, said on April 10. If necessary, you have the ability to control nuclear fission. That means you can charge a warhead and hand it over to him to use as he pleases. You have the ability to accomplish this. This is referred to as an inalienable right.”

Mahmoud Alavi had already revealed the regime’s “secrets” in other literature prior to these statements. “The Supreme Leader stated in his fatwas that the production of nuclear weapons is illegal and that the Islamic Republic will not go for it,” he said, “but a cat kept in a corner may behave differently than a free cat.” It is not Iran’s fault if it is pushed in that direction.”