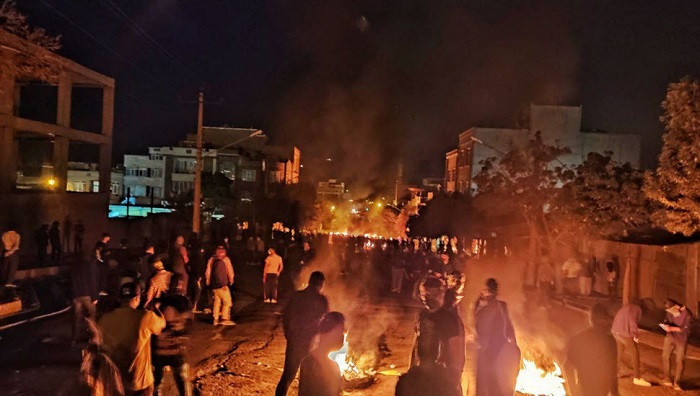 Iran’s nationwide uprising is marking its 111th day on Wednesday with protesters across the country continuing various protest measures against the mullahs’ rule. Brave locals in different cities throughout Iran have also been marking the third anniversary of the killing of Qassem Soleimani, former head of the Revolutionary Guards (IRGC) Quds Force, by burning billboards and posters of his image.

This is parallel to the ongoing campaign of people voicing their hatred of the mullahs’ regime by torching images and anything symbolizing regime Supreme Leader Ali Khamenei and his entire apparatus of oppressive forces.

January 3 marked the third anniversary of the killing of Soleimani in a U.S. drone attack just outside of Baghdad International Airport. Protesters and courageous locals across Iran are expressing their hatred of Soleimani, and the regime in its entirety, by using Molotov cocktails and homemade explosives to target Soleimani’s posters, banners, placards, and billboards.

In other reports, workers and employees of the Ilam Petrochemical Company went on strike today demanding answers to their dilemmas which have been raised with officials for some time now. They first held a gathering at the company plant and then moved their rally outside the local governor’s office.

In the city of Zahedan in Sistan & Baluchestan Province, southeast Iran, authorities flooded the city’s Kowsar Street and began arresting dozens of locals. Reports indicate similar arrests near Towhid Mosque and a nearby football field.

“Khamenei’s Intelligence Ministry and IRGC attacked people’s homes in Javanrud, arresting the city’s youths to prevent the continuation and spread of protests. Such cruelties only add to the Iranian people’s fury and motivation to topple the regime,” she said.

Khamenei’s Intelligence Ministry and IRGC attacked people’s homes in #Javanrud, arresting the city’s youths to prevent the continuation & spread of #Iranprotests. Such cruelties only add to the Iranian people’s fury and motivation to topple the regime.#IranRevolution pic.twitter.com/FeH5wYDtg9

“Young people in Iran will not leave such arbitrary arrests and their perpetrators unanswered by their courageous uprisings. The United Nations and Member States need to take urgent action to compel the regime to stop executions, persecution, and torture in Iran. Silence tramples human rights,” the NCRI President-elect explained.