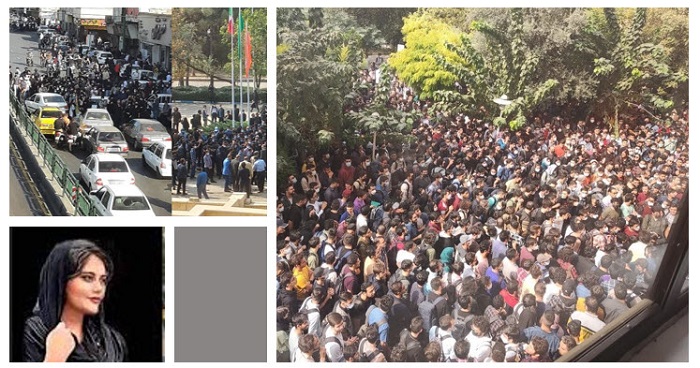 Most politicians, particularly those who wrote and advertised in support of the regime, believed that, as in the past, the regime would be able to put down the protests, if not immediately, then within a short period of time. Despite the regime’s tricks, conspiracies, repression, and killings, the people were able to endure them. In that sense, we are now witnessing a new revolution rather than scattered protests.

To gain a better understanding of the outcome of people’s resistance, we should look at two recent historical events that depict the outcomes of resistance.

Russia launched an attack on Ukrainian territory in February 2022. Despite the obvious condemnations, many Western politicians initially believed that this occupation could be overlooked within the context of global power dynamics.

As a result, the US government offered assistance to Ukraine’s President, Volodymyr Zelensky, and his family in leaving the country and seeking refuge in another country. Zelensky, who refused to surrender, rejected this offer and instead requested that the World powers provide him and his country with weapons so that they could confront the occupiers.

Because of the president of Ukraine’s stance, the entire country decided to support him in his fight. From that point forward, the situation shifted in favour of the Ukrainian people. After 8 months, Russia has been pushed further back and is now globally isolated, while Ukraine is on the verge of victory.

Another case in point is the situation of the People’s Mojahedin of Iran (PMOI/MEK) following the US army’s occupation of Iraq in 2003. The MEK, which has spent years on the border between Iran and Iraq, has witnessed a highly complicated military and political situation.

From one side, coalition forces bombarded and disarmed them as part of a soft dismantlement policy, and from the other, they became involved with an Iraqi government that was an accomplice of the Iranian regime.

Meanwhile, the MEK had only a few options: surrender, contemplate dissolution, or maintain resistance at all costs. With more than 70 days of resistance against the tyrannical regime, the Iranian people have chosen the same path. The path of least resistance at any cost. They have surprised and awed people all over the world.

Because of public opinion pressure and the people’s ongoing resistance, world powers that were unwilling to leave the negotiating table and abandon concessions to the regime have been forced to reconsider their past.

The situation in Iran has now reached a point where Europe and other partners are declaring that nuclear negotiations with the regime are no longer priorities. Furthermore, the world powers are imposing more sanctions on the mullahs’ regime with each passing day.

All of these results are solely the result of the Iranian people’s organized resistance over the course of more than four decades, which has culminated in the protests and uprisings that have occurred across the country, resulting in more than 600 martyrs, 30,000 arrests, and tens of thousands of civilian injuries. Despite the disasters, Iran’s brave men, women, and youths are entering the second month of their uprising toward a democratic republic.