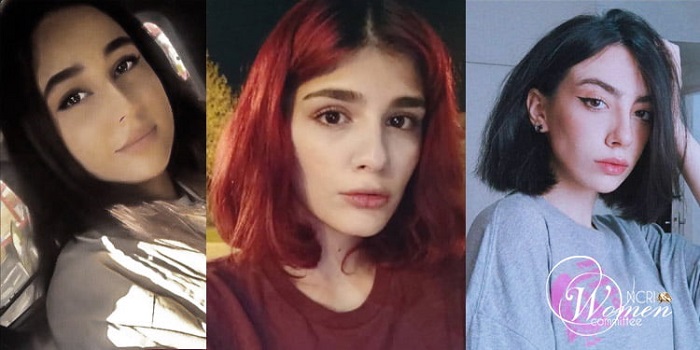 Mahtab Ansarian, a 19-year-old student in the first semester of graphics at Tehran’s Soura University, and Mahshid Zahedpasand, 19, were arrested on November 15, 2022, in phase one of Andisheh, in Shahriar, a city in Tehran Province that is a hotbed of protests. The three young women are currently being held in Qarchak prison.

Mina Afshari, 23, was arrested on November 15, 2022, in Fardis, Karaj, and taken to Qarchak Prison. By promising to release their child, the security services forced her family to remain silent and prevented news of Mina Afshari’s arrest from being published in the media.

Branch 2 of the Revolutionary Court of Shahriar also sentenced Mahsa Farhadi, 21, to two years in prison. She was charged with “assembly and collusion with the intent to disrupt national security.”

Mahsa Farhadi worked at a beauty salon in Shahrak Andisheh’s Eram Complex. On November 15, 2022, after leaving the workplace, she was beaten by security forces and taken to Qarchak prison. The detained protester’s family provided bail for her, but the judge presiding over the case refused to accept the bail.

Melika Aghazadeh, 23, was arrested on October 17, 2022, during a night-time raid on her home. She was first transferred to Evin prison, and then to Qarchak prison. The detained protester was sentenced to 5 years in prison by Branch 15 of the Revolutionary Court and is accused of false charges such as setting fire to university classes and leading protests at the university. Melika’s family has been forced to remain silent by the security forces.

Parisa Nik-khou was sentenced to two years in prison by the Court of Appeal of Tehran Province. Initially, the Revolutionary Court sentenced her to 5 years in prison and a two-year ban on leaving the country. She was denied the right to select her own lawyer. The charges against her are “assembly and collusion to commit a crime against internal and external security” and “disturbance of public peace and order.”

Shilan Rashidzadeh, a civil activist and accounting student at Payam Noor University in Saqqez, was arrested outside her home on January 3, 2023, without a court order. The next day, she was taken to a security detention center in Sanandaj for questioning. There is still no word on the reason for the arrest or the charges filed against Shilan Rashidzadeh.