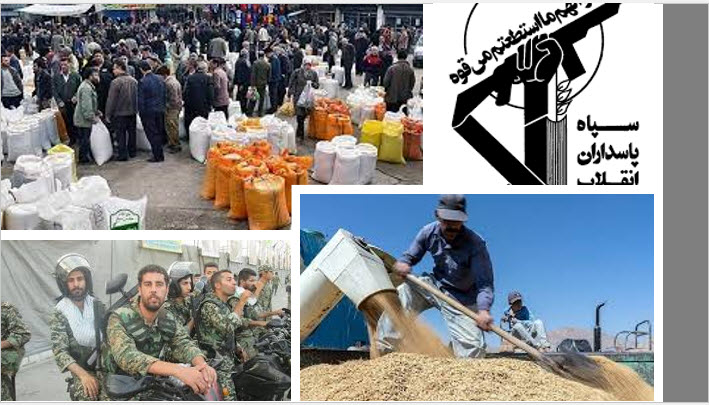 The Iranian regime’s infamous Islamic Revolutionary Guard Corps (IRGC), along with its affiliated institutions, has decided to expand their dominance even further, devouring more of the country’s wealth by interfering with the rice market, destroying the lives of many people and their families who are already living in extreme poverty.

The government has allocated seven trillion rials to rice farming, according to the regime’s Minister of Agriculture, Javad Sadatinejad, but has decided to hand over the project to the IRGC’s financial institution, the Khatam-al Anbiya Construction Headquarters, claiming that its implementation will make the country independent in terms of rice imports.”Our projection for this (topic) in five years is a cost of $3 billion, or an amount of more than 900 million to one trillion rials from oil barter,” he said.

Since the revelation broke, regime officials have reacted angrily, notably Jamil Alizadeh Shayek, the secretary of the regime’s Rice Association. He emphasized his disapproval of the IRGC’s interference in a January 31 interview with the state-run news outlet ILNA.” I was surprised when I heard about the allocation of seven trillion rials to this project,” he stated. The Ministry of Agriculture oversees agricultural, research, and executive entities. How could it not take advantage of veteran and experienced professionals in this sector and give the rice self-sufficiency plan to a non-expert institution?”

750,000 tons of rice must enter the country annually

“Accordingly, rice experts and activists are shocked to learn of the allocation of seven trillion rials to Khatam Base for rice cultivation, and believe the Ministry of Agriculture has outsourced the rice self-sufficiency plan to organizations that lack the necessary expertise in this field,” he added. Some experts even believe this is really a rumor.”

People say there is no possibility of self-sufficiency in rice

The decision to hand over the country’s rice production to the IRGC comes at a time when most farmers in southern Iran, particularly in Khuzestan Province, have lost their rice fields and productivity as a result of the IRGC’s destructive diversion of rivers to its water-intensive enterprises. This move has resulted in fatal protests by those most impacted by water shortages, with many people suffering significantly as a result of a lack of potable water.

In actuality, the IRGC has had even more freedom to pillage the country’s resources since the commencement of Raisi’s administration, which is consistent with regime supreme leader Ali Khamenei’s promise to form a new ‘Young Hezbollahi’ government.