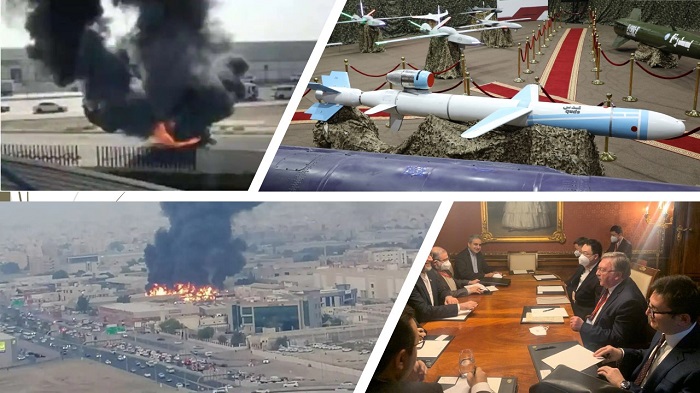 The Iranian regime has launched a drone attack on its Middle Eastern neighbours while trapped in the nuclear talks, which are on the edge of failure. In this recent attack, the regime used their Yemeni proxy organization, the Houthis, to attack Abu Dhabi’s airport in the United Arab Emirates.

This is just the most recent in a series of attacks that have been disrupting the region for years.

The regime plunders the wealth of the Iranian people in order to keep spreading terrorism around the world and to keep the Middle East at war. These crises are intended to engage the international community and the region, and they also serve as a form of insurance for the regime. This is despite the regime’s assertions of fresh and developing contacts with the ‘East,’ which, even if it succeeds in securing a favourable outcome during the Vienna nuclear talks, is confirmation of its worldwide isolation and weakness.

Vatan-e Emrooz: What the Emiratis did not imagine eventually happened

“What the Emiratis did not imagine eventually happened,” the state-run Vatan-e Emrooz daily said on January 20 in response to the latest attack. In the Arab world, the nightmare of instability and insecurity has finally cast a shadow over the heart of Wall Street. The Yemeni war has taken on new characteristics, and it must now be viewed from fresh perspectives.”

“The Yemeni issue is the main and crucial factor in Iran-Saudi relations in the Middle East regional equation, especially in the current circumstances,” the Donya-e Eghtesad daily said the same day. Any opening or deadlock in it will have a significant impact on the two countries’ reconciliation or tension. Yemen has the ability to maintain the Iran-Saudi relationship tensions active, despite the fact that the crisis hotspots in relations between the two countries, particularly Syria and Bahrain, have largely faded.”

The Noandish daily: Friends in Kayhan are understandably happy about such attacks

Officials in the regime, including supreme leader Ali Khamenei, believe that by taking such steps, they will be able to extract more concessions from Saudi Arabia and prevent them from actively participating in nuclear negotiations and adding their own demands, such as the regime’s commitment to stop its destructive behaviour in the Arab world. Given the regime’s already precarious position, these recent acts of hostility are likely to have the opposite impact.

The Noandish daily issued a warning to Khamenei’s mouthpiece, Kayhan daily, on January 19, about the consequences of the regime’s terrorist attack on Abu Dhabi. “Friends in Kayhan are understandably happy about such attacks because they are generally uninterested in improving Iran’s relations with other countries, from Saudi Arabia and the United Arab Emirates to Europe and the United States. Nonetheless, increasing tensions are the last thing the country needs right now.”

This warning sends a clear message to the regime: it’s past time for it to cease blackmailing other countries through terrorism, missile assaults, and drone strikes.

“At a time when Vienna’s efforts to resurrect the JCPOA, as well as talks with the Saudis to resume diplomatic relations, have reached a critical juncture, the recent Houthi attack on Abu Dhabi could complicate the equation and operate as a double-edged sword,” the Noandish daily added. While this strike may improve Iran’s position, it also has the potential to disrupt the talks.”