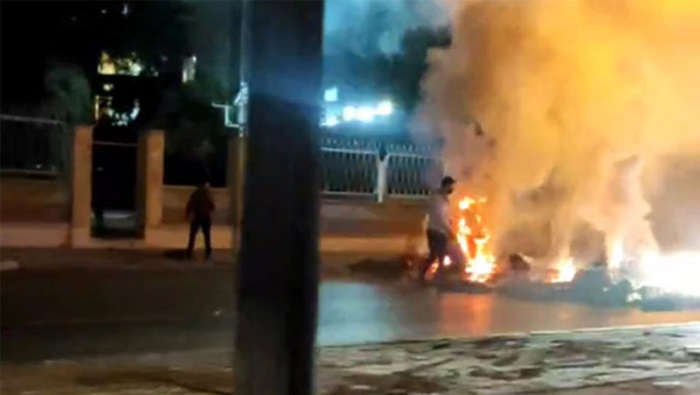 According to reports from across the country on Thursday, people have been holding ceremonies in memory of protesters killed by the mullahs’ regime. People were seen chanting anti-regime slogans and protesting the mullahs’ dictatorship in the cities of Mahabad, Sanandaj, Izeh, Karaj, Ilam, Ashkzezar in Yazd Province, and Kangavar.

Protesters gathered in Izeh on the 40th anniversary of the murder of Hamed Salahshour by regime security forces. Protesters were heard yelling, “This is the year Seyed Ali (Khamenei) is deposed!”

A similar gathering was reported in Sanandaj, where locals gathered at Mohammad Shariati’s grave today to commemorate his birthday and condemn the mullahs’ regime for atrocities against the Iranian people.

Today is also Mohsen Ghaysari’s birthday, a local who was killed by regime security forces. Locals in the city of Ilam gathered to protest the regime of the mullahs.

According to local activists, regime authorities declared martial law in the city of Semirom on Wednesday. Internet access is severely disrupted, and many people have been arrested late at night.

According to reports, regime authorities in Javanrud dispatched many security units to the city’s judiciary building and were installing security cameras in various areas. Officials are concerned about further local protests and are even planning attacks on various administrative buildings.

According to other reports, workers and employees of the Ilam Petrochemical Company went on strike on Wednesday, demanding answers to problems they have been raising with officials for some time. On Wednesday, authorities in Zahedan flooded the city’s Kowsar Street and arrested dozens of residents. Similar arrests were reported near the Towhid Mosque and a nearby football field.

Iranian opposition President-elect Maryam Rajavi of the National Council of Resistance of Iran (NCRI), has once again urged the international community to take immediate action:

I urge the United Nations & its member states to condemn the executions in #Iran by taking immediate action to save the death row prisoners.
The dossier of flagrant & systematic violations of human rights in Iran must be referred to the UN Security Council#StopExecutionsInIran pic.twitter.com/uGalWPRYSS

“I urge the United Nations and its Member States to condemn the executions in Iran by taking immediate action to save the death row prisoners. The dossier of flagrant and systematic violations of human rights in Iran must be referred to the United Nations Security Council,” the NCRI President-elect emphasized.