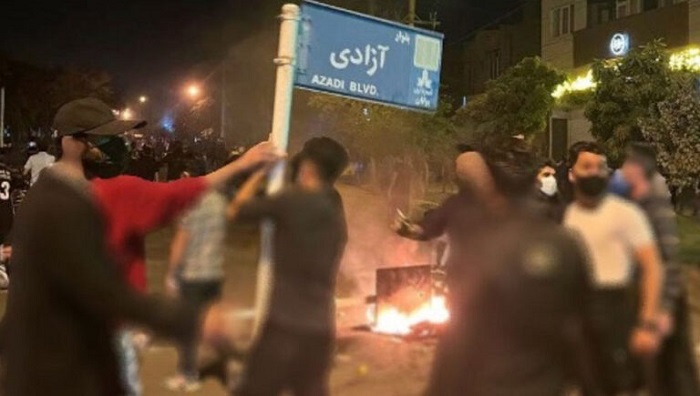 The European Parliament made a strong move on Thursday, adopting a resolution with a large cross-party majority calling on the European Union and its Member States to designate the Iranian regime’s IRGC as a terrorist organization and to broaden sanctions lists to include all individuals and entities responsible for human rights violations in the country, including regime Supreme Leader Ali Khamenei, President Ebrahim Raisi, Prosecutor General Mohammad Jafar Montazeri, and the Iranian regime’s IRGC.

The amendment “condemns Iran’s brutal crackdown on demonstrators following the death of Mahsa Amini, following her violent arrest, abuse, and ill-treatment by Iran’s’morality police’; calls on the EU and its Member States to include the IRGC on the EU’s terrorist list in light of its terrorist activity, repression of protesters, and supply of drones to Russia.”

Iranian opposition President-elect Maryam Rajavi of the National Council of Resistance of Iran (NCRI), reiterated her previous call from March 2010 for the international community to include the Iranian regime’s IRGC and Ministry of Intelligence and Security (MOIS) on their blacklist of terrorist organizations.

“As I have said for years, the IRGC must be designated as a terrorist organization, and the mullahs’ intelligence agents must be barred from entering Europe,” she emphasized.

People in the western and northwest Iranian cities of Saqqez and Mahabad took to the streets to celebrate the European Parliament resolution.

As I have said since years ago, the #IRGC must be blacklisted as a terrorist entity, and the mullahs’ intelligence agents expelled from Europe. #BlacklistIRGChttps://t.co/G0mnNemj7l pic.twitter.com/RAGHpLobUH

On the same day, residents of Dehgolan, western Iran, gathered to commemorate the 40th anniversary of Shadman Ahmadi’s assassination by the regime’s oppressive security forces. According to other reports, on the 126th day of the uprising, workers at a local oil terminal on Qeshm Island are on strike, continuing nationwide protests against the regime.

According to reports from Isfahan, farmers took to the streets once more to protest and demand answers from regime officials about their ongoing problems. They’re looking for answers about water portions of their lands, which have been devastated by the regime’s river rerouting projects.