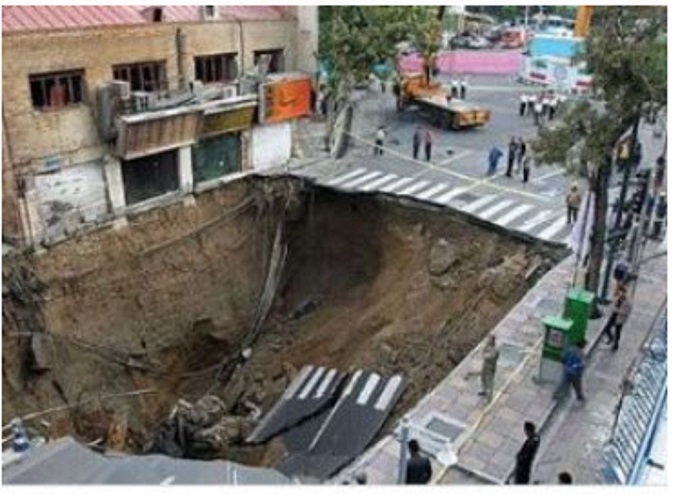 Iran has been suffering from irreversible environmental destruction since 2005, according to water and soil experts. They claim that the ground in Tehran is subsiding at a rate of 17cm per year and that this is not unique to Tehran; many other cities are reporting the same thing. The cause of the disaster, according to the state-run news agency ISNA, is excessive groundwater withdrawal.

“When the amount of withdrawal exceeds the amount of aquifer sustenance, the earth moves downwards and finally the soil particles are compressed, and the phenomenon of subsidence takes on a new meaning, which is the ‘death of aquifers,'” it wrote.”Because the aquifer particles have been compressed due to subsidence and are unable to return to their original state,” it continued. As a result, subsidence is referred to as ‘irreversible risk.’

The damage in the cities is already weakening building foundations, with dangerous cracks appearing in the structures, rendering them uninhabitable. Longitudinal structures like roads and railways, power lines, gas and oil pipes, power plants, and refineries must be carefully aligned, and any deviation will result in severe and dangerous consequences. These circumstances are putting the Iranian people’s lives at risk.

The damage in the cities is already weakening building foundations, with dangerous cracks appearing in the structures, rendering them uninhabitable.

“In 13 years, four times as much water that has entered the plain has been withdrawn by various means, including agriculture,” according to the head of Iran’s geological water group of the Geological Survey of Minerals and Exploration. As a result, seeing a ‘water depletion on the horizon’ would not be surprising.

In this regard, Dr. Iman Entezam stated additional facts about the environmental crisis in an interview with ISNA. “The country’s groundwater situation is somewhat clear to everyone,” he said, “and we’ve seen a decrease in groundwater reserves since about 1993-1994 due to improper withdrawal, the creation of illegal wells, climate change, and a lack of proper water management in the country that occurred all over the country.”

Other regime experts claim that subsidence is nothing new, that it has been occurring in the country for the past 10 to 15 years, and that the consequences are only now becoming apparent. They’ve started calling this phenomenon ‘Earth cancer,’ because the regime is no longer able to do anything about it.

Iran could theoretically produce and provide enough cereal for the entire Middle East region with the amount of agriculturally capable soil it has.

North Khorasan, in the northeast, which has experienced major natural disasters such as floods and earthquakes, most of which were above five on the Richter Scale, now has to factor in the dangers of dangerous subsidence.

Yazd province’s plains of Yazd-Ardakan and Abarkooh have been identified as having the highest rates of subsidence in the province. Markazi (Central) province is also experiencing rising levels of subsidence due to a lack of groundwater resources, catchments, and reliance on internal resources. Around 609 plains in Iran are currently subject to subsidence, according to recent reports.