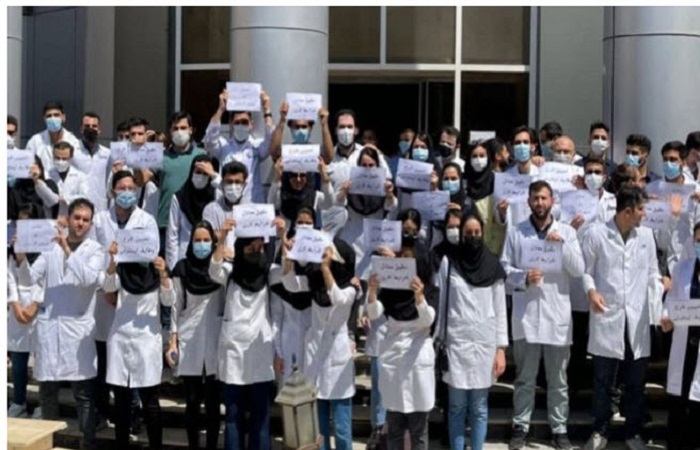 The officials of the regime claim that since the protests of 2019, the regime has lost public trust, and the ongoing demonstrations are evidence of this. According to regime experts, the regime is likely to face much larger and more dangerous protests in the near future as a result of rising inflation, public poverty, and the failure to reach an agreement in the JCPOA negotiations.

One of the regime’s experts, Morteza Ofoghe, warned that “Politicians will face new and more difficult political and social issues between the people and the rule” if they “Continue the same trend.”

Recently, some economic experts have cautioned the regime’s president Ebrahim Raisi and their feeble government that reality and what this group has claimed about their economic changes are vastly different. Raisi and his economic ministers have frequently been made fun of for continuing to make empty promises rather than making improvements to the economy, which only makes the issue worse.

The truth is that Mohamad Mokhber, the regime’s first vice president, is completely uninformed about the economy, and the regime’s head of the budget planning organization and the head of the Central Bank have never studied economics.

They believed they could turn the country’s economy upside down, but due to massive corruption in the government, changes have become impossible, despite their claim that the economic problems are related to the JCPOA’s uncertainty.

Because of the regime’s failure to address economic issues, the regime has increased the number of executions, intensified its repression of Iranian citizens, raised the issue of compulsory hijab, and launched a major crackdown.

Another expert from the regime, Abbas Abdi, stated on Twitter: “Regarding the behaviour of the Ershad (Guidance) patrol with teenage girls, I can say and think that sooner or later one of these encounters will unintentionally lead to an unpleasant situation. I think it is necessary for the police force to get a serious assessment of this issue and the possibilities ahead, maybe these encounters must be reconsidered.”

Fayaz Zahid, a regime journalist, cautioned the regime against enforcing the hijab requirement and claimed that those behind the plan are engaged in malicious behaviour to divert attention away from the real issues facing society.

Mohammad Gharazi, the former regime’s minister of oil, acknowledged the escalating repression, which is intended to contain the volatile situation in society. In an interview with the state-run newspaper Mostaghel on July 25, he warned the regime of the social repercussions of its actions, stating, “What has happened in the country is that governments have always misused public rights in favour of a special group.

That is, instead of respecting public rights, they have imposed the rights of political power. Some politicians believe that the gap between the government and the people has increased, and this has cost the system a lot.”

“What factors do you think caused this gap? Instead of sticking to the government, the political power should consider the rule of the society. For example, inflation is against the administration of the country. Inflation has reached skyrocketing numbers, shrinking the livelihoods of people. What is the solution? Inflation is really heavy,” he concluded.