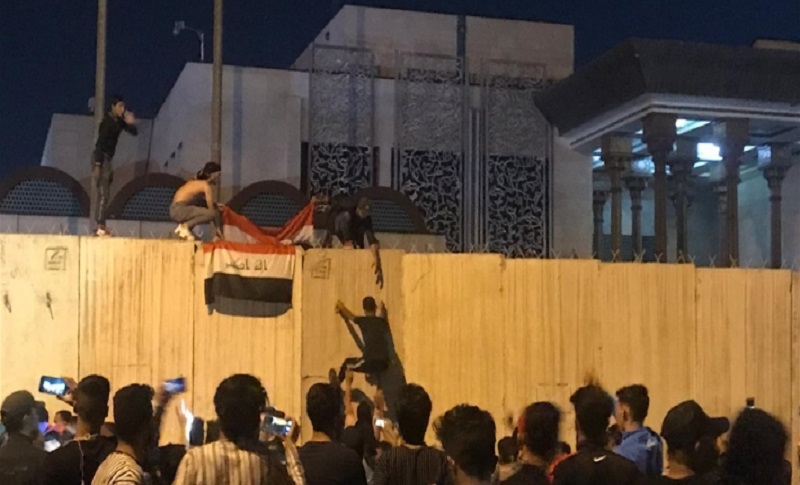 Dozens of Iraqi protesters attacked the Iranian consulate in the Shia holy city of Karbala on Sunday, November 3, 2019, reported Reuters.

Local reports say that four protesters were killed outside the consulate.

Since the protests began in Baghdad, more than 250 people have been killed.

Reuters reported this week that Qassem Soleimani, the head of the elite Quds force of Iran’s Revolutionary Guards, which sponsors Tehran’s allies abroad, flew to Baghdad for a secret meeting at which a powerful Shi’ite party agreed to keep the Iraqi prime minister in office.

A key slogan in the nationwide popular uprising since October 1 has been the call to expel Iran’s regime and its agents from Iraq and end the mullahs’ meddling in the affairs of this country.

Also on Sunday, the Iraqi protesters removed the name of Ruhollah Khomeini, the former Supreme Leader of the Iranian regime, from the street of Najaf airport, replacing it with the name: “the street of martyrs of October revolution.”

youths are expressing their utter anger against Khamenei and Iran’s Revolutionary Guards (IRGC) Quds Force chief Qassem Soleimani. This is the response of Iraq’s nation to Khamenei insulting the Iraqi people by describing their courageous uprising and massive demonstrations as mere “riots” and calling for an end to this movement,” reported the website of the People’s Mojahedin Organization of Iran (PMOI/MEK Iran) on Saturday.

The Iranian regime’s Supreme Leader Ali Khamenei on Wednesday accused the Iraqi and Lebanese demonstrators of being supported by the United States, Israel, and various Arab states. His remarks sparked fury amongst the Iraqi demonstrators.

Iran’s regime has interfered in the internal affairs of the country since 2003 and has managed to gain significant control and influence. It is spending large sums of money in the Iraqi elections to back candidates such as Hadi Al-Ameri – the Badr Organization’s leader.

The Iranian regime’s interference in Iraq is one part of its plot to destabilize the Middle East.

Interference in regional countries and exportation of Islamic radicalism and terrorism is one of the regime’s pillars, or as they call it, their strategic depth. The regime’s highest officials, including Khamenei himself, have repeatedly stated that if they don’t fight in Iraq and Syria and if they don’t draw the line there, they would have to do so in Tehran, Shiraz, and Isfahan.

According to specific information obtained by the (PMOI/MEK) from within the Iranian regime, Iran’s embassy and consulates in Baghdad, Basra, Karbala, and Najaf are under the control of the Islamic Revolutionary Guard Corps (IRGC) and its Qods Force. Many IRGC commanders are stationed in these centers, and from there they control the departments and groups associated with the regime, including Hashd Al-Shaabi.