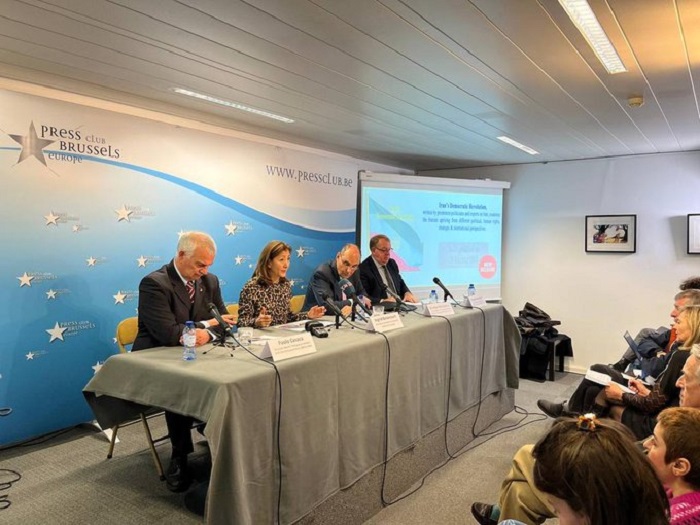 On January 10, the International Committee in Search of Justice (ISJ) held a press conference at the Brussels Press Club to introduce a newly published book, entitled “Iran’s Democratic Revolution”.The study, written by prominent European politicians and experts, aims to paint a clear picture of how Iran has become a battleground for its people and democratic forces against tyrannical dictatorships and their foreign backers.

A number of journalists, as well as representatives from diplomatic delegations based in Brussels, attended the conference and raised concerns about the Iranian people’s nationwide uprising, the international community’s policy toward Tehran, and the prospects for a democratic revolution in the country.

They claim that the recent executions were carried out with kangaroo courts. They also mention that two more people were sentenced to death and placed in solitary confinement, but their executions were halted due to widespread protests.

“These executions are open and obvious. There were no free trials available. Torture was used, and confessions were coerced. “Two more people were sentenced to death, placed in solitary confinement, and were about to be executed when mass protests stopped them,” said former MEP Paulo Casaca.

They also argue that the current protests in Iran are a women’s revolution and that the misogynistic regime should be replaced by Iran’s main democratic alternative, the National Council of Resistance of Iran (NCRI), led by President-elect Maryam Rajavi.

“They should begin by recalling our Iranian ambassadors. Then we must close the regime’s embassies in our respective countries. Third, as we watch what is happening in Iran, we hear people say that they must win this revolution, but who will be the leader? There is no one to construct democracy. We are aware that there is an alternative. It has arrived. It’s the Iranian opposition. This resistance is being led by a woman. And a woman should lead the transition from a misogynistic regime to a democratic state,” Ingrid Betancourt emphasized.