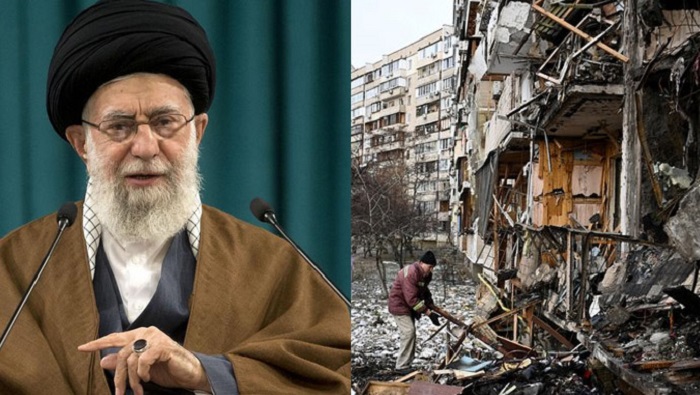 After days of Iranian regime officials publicly backing Russia’s takeover of Ukraine, Iran’s supreme leader Ali Khamenei attempted to soften his regime’s stance and defend his support for a war widely denounced around the world.”I believe Ukraine is a victim of American policy,” Khamenei remarked in a speech on Tuesday, March 1. Of course, we oppose the annihilation of nations, the killing of people, and the ruin of national infrastructure. That is not acceptable to us.”

Khamenei attempted to shift the narrative toward blaming the United States without mentioning the attacker. “The U.S. brought Ukraine to this point. The U.S. interfered in the internal affairs of that country and assembled rallies against governments, concocted velvet movements, colorful coup d’états, brought U.S. Senators among protest rallies, removed one government, and replaced with another one, and naturally, this is what it led to,” Khamenei said.

While the people of Ukraine have shown an amazing resistance to the occupation of their country in recent days, Khamenei, whose dictatorship lacks popular legitimacy, is despised in Iran, and has only held power via murder and repression, declared, “People are the most important asset of governments.” The government and people of Ukraine would not be in the current position if the people had arrived on the scene. Because they do not trust the government, the people did not intervene.”

It is worth reminding that a few hours after Russia’s attack on Ukraine, regime president Ebrahim Raisi in a call with Vladimir Putin said, “The expansion of NATO toward the east causes tension… and is a huge threat to the security of independent countries in different regions.” Raisi also voiced the hope that “what is going on is in the best interests of nations and the region.”

In a similar tone, Hossein Amirabdollahian, the regime’s foreign minister, and Friday Prayer leaders, who speak for Khamenei, justified and endorsed the invasion of Ukraine.”NATO’s provocative acts are at the foundation of the Ukraine conflict,” Amirabdollahian remarked.

“What is happening in this region today is the outcome of provocative political, economic, military, and cultural efforts,” said Saeed Khatibzadeh, a spokesperson for the foreign ministry.” The Ukraine situation is the outcome of American interference,” said Ahmad Khatami, the head of Tehran’s Friday Prayer.

Senior regime officials, clearly, never make such statements without Khamenei’s prior approval. However, the Iranian people’s retaliation, which has shown unwavering support for the people of Ukraine, has generated divisions and chaos within the regime’s ranks.

“Who told Raisi to contact Putin?” the state-run Arman daily questioned. At the very least, you should have avoided declaring that the invasion is in the best interests of the region’s nations! Which war and aggression have benefitted people?”

The Russians have never had the regime’s back, according to the Sharq daily. “Support the Russians if you want to.” Did they, however, recognize your rights in the Caspian Sea? Did they assist in the evasion of US sanctions? Were they on our side in OPEC? It asked, “Did they give you space in Shanghai?”

The ruling theocracy is engulfed in a web of issues that have only gotten more convoluted since Russia invaded Ukraine. As it suffers in the nuclear talks, the regime is heavily reliant on Vladimir Putin’s support. And, by officially and tacitly supporting Russia’s invasion of Ukraine, Khamenei has created a slew of new issues for his dictatorship.